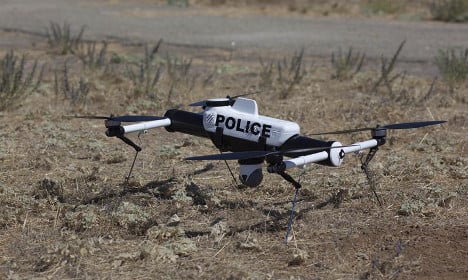 This is the kind of drone being used by police in Malmö. Photo: Saab

A camera-mounted drone, borrowed from the national police force, hovered above the Rosengård and Kroksbäck districts as police continued to grapple with arson attacks that have seen more than 70 cars burned out in Malmö since early July.

The use of the unmanned aircraft has also led to the temporary imposition of a no-fly zone over the city to minimize the risk of mid-air collisions.

Much cheaper to operate than the police helicopter that has also been patrolling the skies over the city, the drone’s small size and stealth makes it much harder for fire-starters to spot.

“It has the same positive impact as the helicopter — we can quickly see where we need to direct units if we’re going to seal off a certain area to make an arrest,” said Karlsson.

The drone is one of three ordered by the Swedish Police from Saab earlier this year.

The city’s police force has also deployed more motorcycle units for increased mobility and greater ease of access to areas targeted by the arsonists.

Civilian police officers are also being sent into the areas most affected by the car burnings.

Sweden’s government on Tuesday announced it was working on plans to bring the perpetrators to justice.

While Malmö has borne the brunt of the attacks, cars have also been set alight in recent days in Stockholm, Gothenburg, Norrköping, and other cities across Sweden.