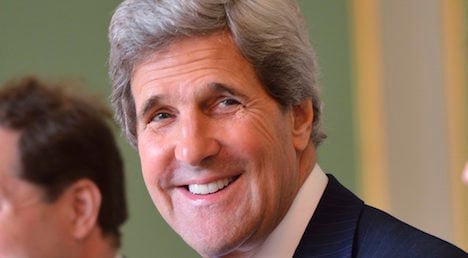 John Kerry pictured on a previous, more official, Sweden visit. Photo: Henrik Montgomery/TT
Kerry is visiting the country to see his Stockholm-based stepson André Heinz marry his Icelandic fiancée Maria Marteinsdottir. Heinz, son of Kerry’s wife Teresa Heinz Kerry, is an environmentalist and heir to the Heinz Ketchup fortune, who has lived in Sweden since 1999. He will take over as chairman of the family’s charitable foundation Heinz Endowments later this year.
Kerry’s visit to Sweden, despite its private nature, has not gone unnoticed by the tabloids, with his large security detail garnering unavoidable attention around the Grand Hotel, where he is staying. Expressen reported that the wedding party dined until 1am at the upscale Sturehof restaurant on Tuesday night, stopping for a selfie with bystanders on his way out.
Kerry mentioned his plans to attend the wedding when Nordic prime ministers visited Washington DC in May. Speaking of Heinz during an after-dinner speech, he said: “I mean, he’s been living there forever now, and he met a beautiful Icelandic woman who he is marrying this summer. And I look forward to being in Stockholm for that.” Kerry has his own Nordic connections, his father having served at the US Embassy in Oslo when Kerry was a teenager.
The secretary of state took the chance while he was in town to look up Foreign Minister Margot Wallström. The pair, along with US Ambassador Azita Raji, met on Thursday for an informal lunch at the Östermalmshallen market hall in the centre of the capital.

“He called me last night and said he’d love to meet up,” Wallström told TT. She said that while the meeting was informal, they’d taken the opportunity to discuss Syria, Turkey and the Russia-Ukraine conflict.
“We also spoke about poetry. I have him a little book with [Tomas] Tranströmer’s poetry in English,” she said. Swedish poet Tranströmer, who died last year, won the 2011 Nobel Prize in literature.
US Vice President Joe Biden will be in Sweden on official business next Thursday.