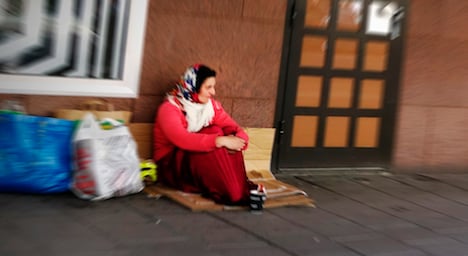 A beggar on the streets of Stockholm. Photo: Hasse Holmberg/TT
The move was announced by Civic and Local Government Minister Ardalan Shekarabi, who is under pressure from local politicians alarmed by the spread of begging to small towns across the country:
“It is natural at this stage to note that we have a problem, and that is very clear when I meet local politicians,” Shekarabi said.
Shekarabi was speaking from Iceland where he was meeting ministers from other Nordic countries, and discussing how they had tackled the issue of begging. Denmark has banned the practice at a national level, while Norway has allowed local authorities to introduce bans.
Sweden has so far tried to tackle the problem by reaching agreements with Romania and Bulgaria to improve the situation of Roma in their homelands.
“Yet still the begging continues, and our position is that begging in Sweden is no solution to the discrimination, poverty and social exclusion in the countries in question,” Shekarabi said.
Shekarabi said it was “too soon” to say how a Swedish ban might be worded, adding that the country would “need to study the experiences of other countries”.
The Green Party, junior partners in the Social Democrat-led coalition, immediately signalled that they would oppose any move that used criminal law against beggars:
“Begging is not a crime in Sweden and the government  does not intend to change this legislation. You can’t ban poverty. It is not the government’s policy to use criminal law against people who ask others for help,” the party’s migration spokesperson Maria Ferm said.
Campaigning group Civil Rights Defenders also criticized the idea of a ban:
“If you think you can legislate poverty away then it’s incomprehensible that you should target the poor person instead of whoever put him or her in that situation. Because that’s exactly that Romania and Bulgaria have done. They force vulnerable EU citizens, often Roma, into total social exclusion,” Civil Rights Defenders Sweden’s general secretary Robert Hårdh said.
Opposition parties were divided on the issue. The main opposition Moderates’ party secretary Tomas Tobé said he welcomed that the Social Democrats had “woken up.” But the Liberals’ spokesman on legal issues, Roger Haddad, said a ban would be a “major attack on free movement in the EU”.
A survey carried out by SVT in April 2015 found that there were between 3,400 and 4,100 beggars in Sweden from other EU countries – primarily Bulgaria and Romania. This figure was more than double the number from the year before.