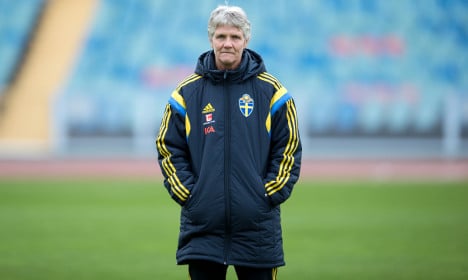 1. The time she dissed both Bush and Obama

Sundhage has been invited to the White House twice: when she won an Olympic gold in 2009 and a World Cup silver in 2011 coaching the US national team. Both times she said no. “Showing off and meeting important old men and women doesn't particularly fascinate me. I'm at my happiest on the pitch in a pair of football shoes,” she told the NT newspaper in one interview. 2. The time she had the perfect reply to whether women can coach football

Sundhage is occasionally named as someone who could take over as coach of the Swedish men's national team (although she has said she does not want to).

Responding to a reporter asking her in 2014 if a woman would be able to coach a men's team, she said: “Well, then, let me ask you a question: does it work with a female chancellor in Germany? Angela Merkel runs a whole f***ing country. Clearly it works.” 3. All those times she played Bob Dylan hits

Her many football merits notwithstanding, Sundhage is also well-known for breaking out in song every now and then. She has revealed that when she took over as US women's coach and met the team for the first time, she introduced herself by singing Bob Dylan's “The Times They Are a-Changin”. She has since performed in interviews, football trainings and awards shows.

4. The time she got on a Swedish stamp way before Zlatan

Sundhage was among the first Swedish football players to officially be depicted on a stamp in a 1988 series together with Torbjörn Nilsson and Ralf Edström. The first football stamp, inspired by Swedish legend Lennart Skoglund, was issued in 1958, but as Swedish law at the time did not allow stamps to feature people still alive (apart from the King) it did not mention him by name. Sundhage is herself a former professional footballer. Photo: Adam Ihse/TT

5. The time she had a real zinger for sore losers

You probably all remember when US goalkeeper Hope Solo accused the Swedes of being “cowards” after they knocked the Americans out of the 2016 Olympics in Rio de Janeiro. Sundhage simply replied: “I don't give a crap. I'm going to Rio, she's going home.” Well played, Sundhage. Well played. 6. The time she pretended to be a boy

Sundhage is a pathbreaker in football, growing up at a time when women on the pitch were unheard of. When she was seven years old a coach let her play for the local children's team, Marbäcks IF, but told her that she then had to call herself by the Swedish boy's name 'Pelle'. Some five decades later, things have certainly changed and few Swedes today do not know who 'Pia Sundhage' is.

“When I started, girls weren't allowed to play football. And now I'm here as manager of the Swedish women's national team making history,” she told broadcaster SVT after beating Brazil in the Olympic semi-finals. Here are a couple of other times Sundhage was totally awesome: