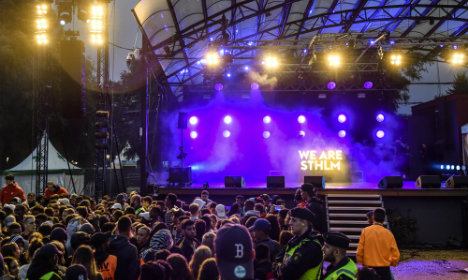 Photo: Anders Wiklund/TT
The arrest was made on Friday night during the We are Sthlm festival.
“Laying hands (on someone) is considered a sexual assault, any more than that and we consider it a (possible) rape,” Kjell Lindgren of Stockholm Police told TT.
“Initial analysis gave the impression that a rape had taken place. After conducting a number of interviews and investigative work, we are now treating the case as a sexual assault,” Lindgren continued.
Police had received 17 reports of sexual assaults prior to Friday. Additionally, reports have been made of assault, vandalism, violence against officials and infringements of knife laws.
Eighty-nine people have been ejected from the festival or taken into custody by police for public disorder.
Police have now received a total of 38 reports of sexual assault during the festival.
A total of 21 sexual assault reports were made at the festival last year.
Swedish festivals have seen a trend in increasing reports of sexual crimes this year, including at last month's Bråvalla Festival, after which headline act Mumford and Sons announced they would boycott the event.
We are Sthlm is an annual youth music festival that takes place in central Stockholm. The 2016 festival is scheduled to finish on Saturday night.