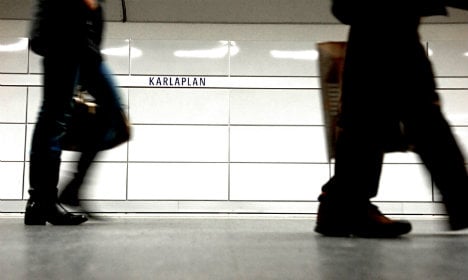 File photo: Ingvar Karmhed/TT
A workers' union has expressed its concern regarding the safety of fully automated systems.
The proposal, which is likely to cost 1.6 billion kronor ($190 million), was made by the municipality's Traffic Committee, reports SVT.
“The preliminary research we are set to carry out will determine whether this is a feasible goal. We want a metro line that enables Stockholmers to grow, and a fully automated train is an important aspect of this,” Kristoffer Tamsons of the Traffic Committee told SVT.
One requirement for an automated subway is barriers been platforms and trains at all stations, an issue that the committee intends to examine closely.
“Platform doors contribute to reducing disruption on the subway but also create a sense of safety. If we want to transition to automatic operation, platform doors in some form will be a requirement,” Tamsons told SVT.
The new automated train, which would be on the existing red line of the city's metro, would also offer more frequent departures and contribute to improved safety and security in the metro, says, the committee. Although the cost of the train is high, the long-term economic and social gains will make the investment worthwhile, according to Tamson.
“This is a profitable venture for society and the economy, as it lays the foundation for fewer disruptions in a way that has positive side effects. And if we can operate more trains, have more frequent departures and more on-time arrivals then our public transport system will become a more attractive proposition. We can then increase housing, make (the city) more attractive for businesses, and so on,” Tamson said to SVT.
SEKO Tunnalbanan, an independent union for metro employees has, meanwhile, taken a critical view of the proposal, arguing that safety will be negatively affected by the absence of drivers.
“Those of us that work in the metro, transporting people safely, providing a service and resolving any problem whether large or small, are deeply concerned over this development. If the Traffic Committee approves the proposal, which places savings before safety, then safety and security will be among the things to be put at risk,” said the organisation in a statement.