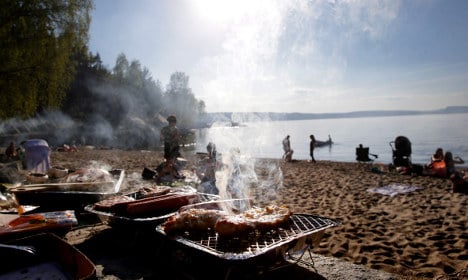 Stop wrapping up in warm sweaters, hold off on sharing that hot chocolate recipe and cancel your ski trip to Åre to enjoy the first snow of the season. Temperatures are rising in Sweden.

Kalmar, earlier this year named the country's best summer town, was expected to enjoy the hottest temperatures on Monday with the mercury climbing to what the Swedes call a sweltering 25C.

According to the national weather agency SMHI, the southern and central Götaland and Svealand regions are set to get the lion's share of the return of summer temperatures.

“The rest of the week looks promising, mainly in the country's southern parts. If you want to get the most out of the August heat you should stick to the eastern coast of Götaland or eastern Svealand where the temperature could reach above 20C. In some parts it will get warmer,” meteorologist Alexandra Ohlsson told the TT newswire.

The mini-heatwave is expected to peak on Friday, so get those barbecues back out of the shed. But in northern parts of Sweden the weather will stay cool with patches of rain, according to SMHI.

And a ski resort in Åre has already had its first snowfall. “Of course not everyone thinks, as we do, that snow in August smells like longing for winter and skiing. We love the winter even in summer,” Marie Lithén, owner of family-run mountain restaurant Bistrologiskt, told The Local after her colleague filmed the snowfall.