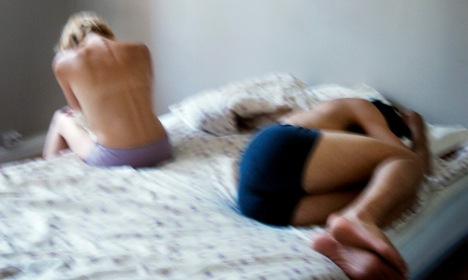 In the study, the annual 'Kådiskollen' (literally: condom check) by the Swedish Association for Sexuality Education (RFSU), a total of 44 percent of Swedes described themselves as satisfied with their sex lives while 31 percent said they were not satisfied.

A total of 72 percent of those Swedes who described themselves as unhappy said it was because they did not have sex as often as they would like to.

One in five women said not having orgasms was the main reason they were unhappy, while only five percent of male respondents listed that as a factor. Half of all Swedish women interviewed said they had faked an orgasm at some point, compared to 16 percent of all men.

While Swedes may have a reputation for their liberal attitude to sex, the frequency of a romp in the hay is dropping, and the government announced last month that it would launch a study to investigate why.

“If it had been down to free choice it wouldn't have been a problem – obviously the state shouldn't tell people how often to have sex – but it is often linked to stress, pressure and people feeling they don't live up to a certain body ideal. That's a problem and it will lead to people feeling even worse. We're humans, we need intimacy,” health minister Gabriel Wikström told The Local in March.