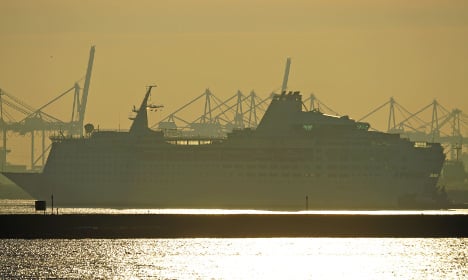 Floating Accommodations claims that a sale may be necessary to cover losses they would incur if the Swedish migration agency (Migrationsverket) fails to pay a 54 million kronor ($6.44 million) bill the company has sent to the agency for the costs of running the ship.

The US-based shipping magnate sent out two invoices totalling the mammoth fee earlier in August, despite Migrationsverket insisting that their agreement to house asylum seekers on the vessel has been null and void since July.

“We’ve put the Ocean Gala up for sale because it appears that Migrationsverket will try to get out of our agreement. As contractors we have an obligation to try to limit the damage,” Floating Accommodations spokesperson Kjell Tandberg told local newspaper Sundvalls Tidning.

“If someone buys or charters it our demand to Migrationsverket will reduce, and if not, we will continue to demand payment for the whole year as if we were in operation,” he added.

The attempted sale is the latest twist in a long-winded dispute between the ship’s owners and various Swedish entities, including the migration board and a local authority.

The affair started in February when Sweden signed a deal to lodge 1,800 asylum seekers aboard the ship, with its planned port of call Utansjö, in Härnösand on the Baltic Sea.

Härnösand municipality vetoed hosting the ship however. The Swedish migration board accepted that decision, before scrapping the deal with the firm entirely in July, arguing that the necessary requirements had not been met.

“Our deal was dependent on the procurement of all the necessary permits. This was not the case and the deal is therefore null and void,” Migrationsverket official Magnus Gustavsson said in a statement at the time.

Though Härnösand municipality banned the vessel from docking at Utansjö, the owners opted to lodge it there anyway. An appeal against that ban was subsequently thrown out by the Östersund regional Land and Environment Court at the start of August.

In a further act of defiance, Floating Accommodations has been billing Migrationsverket around 800,000 kronor per day since the start of July for the running costs of the ship.

But the immigration authority does not accept the validity of the invoices.

“Migrationsverket continues to deny Floating Accommodations’ demand. Our position is and always has been that the agreement ended on July 3rd, 2016,” Migrationsverket press officer Petter Sundsten told newspaper Aftonbladet in response.