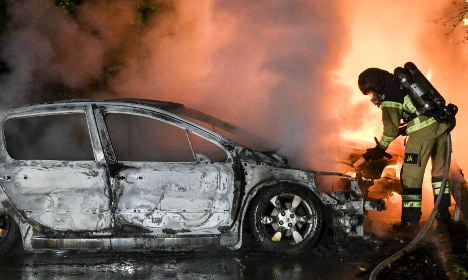 Malmö police have called in both a helicopter and drones to fight the arsonists. But the most recent suspect was caught through rather more traditional police methods.

Officers on a stakeout witnessed two men setting fire to a car on Ramels väg in Rosengård late on Monday night and were able to seize one of them, in his thirties. The other man managed to escape.

The first man, who was known by police, is suspected of vandalism and narcotics offences.

“It's a person who appears [in investigations] every now and then,” police spokesperson Lars Förstell told regional newspaper Sydsvenskan.

Another three fires burned in Malmö, east of Rosengård, just before midnight on Monday.

At least 70 cars have been burned out in the southern Swedish city of Malmö since July, while car fires have also been reported in other cities across Sweden, including Stockholm, Gothenburg and Norrköping.

Emergency services have also been called out to battle car fires in Copenhagen and Oslo.

Four suspects, including the one arrested on Monday, have been questioned this summer in connection with car burnings in Sweden's third-biggest city.

A 17-year-old boy suspected of setting a police car on fire handed himself in to police on Thursday, and on Friday another man was questioned. A third man was arrested in mid-August with cans of petrol and a hammer in his car.