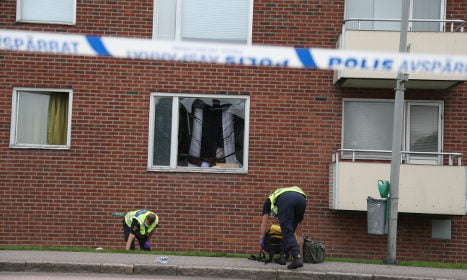 Police investigators at the scene of the grenade blast in Gothenburg. Photo: Björn Larsson Rosvall/TT

A number of gang-related incidents in Gothenburg have made headlines recently. What is the background to them?

“We have severe gang problems not only in Gothenburg but also other big cities. It relates to several things: one is organized crime in the area, mostly regarding narcotics. There is also a subculture of violence to do with animosities between different factions and gangs,” Sarnecki explained.

“The thing that happened in Gothenburg is part of a cycle of violence,” he added.

“There are two groups and they try to hit each other as hard as possible. In the last year there was a shooting in a restaurant and people were killed. One side might not be happy with the sentence from that case, so they look for a kind of revenge, and are careless, throwing something into a house where they know one of the opposing people lives.”

Rostami agreed that the grenade incident in Gothenburg has a long-standing history.

“The problem in Gothenburg is relatively old,” he said.

“It has been to do with different factions and their conflict. This problem in that specific area was originally to do with a girlfriend or thereabouts, but it has escalated to the degree that the people involved in the conflict don’t even know what it’s about. It’s now simply a gang issue, a gigantic soap that has gone on for quite a long time.”

Are innocent people now actively being targeted in these attacks?

“Gang violence starts with shooting the people you hate, but you can’t always get to them,” Sarecki noted.

“You get more careless and you don’t care that other people will be hurt, so the next step is to deliberately try to hurt the people who are close to the people you hate. I’m afraid we could be at the border of that stage,” he added.

“The shooting at the restaurant was extremely ruthless. There was a high degree of probability that other people would get hurt, which they were. The throwing of the grenade is more escalation. It’s very serious.”

Is Sweden’s problem with gangs getting worse?

“Perhaps, but in the 1990s there were gang problems too. There were incidents with grenades and gangs then too,” Rostami said.

“It’s all about perspective,” Sarecki added.

“In a five to seven-year period it has increased. In Gothenburg in particular there was a feeling that after the sentence from the restaurant shooting it could be quiet, but it has obviously escalated once more.”

Are police struggling to combat these gangs?

“You have to take into account that what has happened in Gothenburg occurred in an area where people aren’t necessarily keen to cooperate with the authorities,” Sarecki emphasized.

“Without cooperation it isn’t easy to solve. In that regard, arresting the people involved in the restaurant shooting was a big success. The police have placed a high priority on these kind of cases.”

Rostami agreed that police find it difficult to speak to witnesses about the incidents, but also pointed out that it isn't impossible.

“Most people don't want to speak officially, but there are many who would speak unofficially,” he said.

“The consequences of things like what has happened this week on someone's mindset are significant. People start to worry about their kids, for example.”

Is there a clear solution to the issue?

“One alternative, which has happened in places like the USA, is trying to create a dialogue,” Rostami suggested.

“You can try to solve the problem by talking to the key people. But it's an old conflict, and that's not easy to do.”

Sarecki agreed that targeting key figures is important for the police in tackling gangs: “The most important part is incapacitation,”

“These people need to be locked away for a pretty long time. It’s a kind of network we’re talking about, and networks are consolidated by a few people in particular, who are leaders. If you disturb the network, you disturb the communication and the plan. So the challenge for the police is to get the right people.”