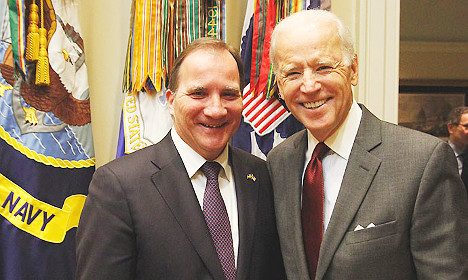 President Obama’s right-hand man travels to Sweden from Turkey, where he has sought to improve prickly relations with a Nato ally.

Biden and Löfven are likely to discuss global migration challenges ahead of a September summit on refugees in New York for which Sweden is one of the joint organizers.

“I look forward to welcoming Vice President Joe Biden to Sweden. The relations between Sweden and the US have rarely been as good as they are now, and I see his visit as an expression of this,” said Löfven in a statement.

Biden’s one-day visit will cause traffic disruptions in Stockholm, with a number of bus routes and roads scheduled to close on Thursday.

The airspace above Stockholm city centre will also be shut down to coincide with the visit.

The temporary no-fly zone will be in place from 5pm on August 24th until 10pm on August 25th. Along with airplanes it will also cover paragliders, drones, and even model airplanes.

Regular flights to and from the Swedish capital’s Arlanda and Bromma airports will not be impacted by the measure however, having previously filed their flight plans.

The transport agency’s decision to close central Stockholm airspace followed an application from Swedish police ahead of the US Vice President’s trip.

Biden’s counterpart US Secretary of State John Kerry has also been in Sweden this month. His visit was not an official one however, but for a family wedding.