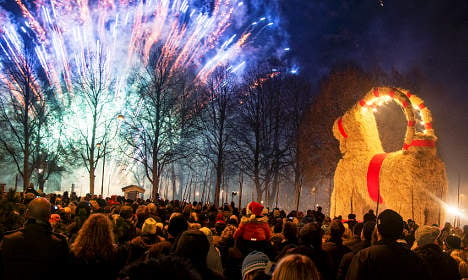 The Christmas goat looks at the fireworks and contemplates its future. Photo: Mats Åstrand/TT

When questioned by police the man first denied setting fire to the giant straw buck. But he soon gave up the pretence given his fringe and eyebrows were singed and his face was covered in soot when the police arrested him.

He also held a lighter in his hand, and in his pockets police found a balaclava and newspapers. Part of his jacket had melted after his clothing caught fire in the blaze. The smell of petrol lingered on his clothes.

Also, a security guard had chased him from the scene as the scent of burning straw spread through the town in the early hours of December 27th.

So eventually he confessed that he’d maybe had “a few too many drinks” before spotting his chance to leap over the security barrier surrounding the Christmas goat, SVT reports.

“I had the idea, and it was now or never,” he told the police.

Now local authorities and the prosecution have made it clear that not everyone is amused by gigantic flaming effigies.

Gävle wants 100,000 kronor ($12,000) in damages from the fire-starter, and the prosecution reckons the crime deserves to be classified as aggravated in view of the goat’s cultural, symbolic, and financial importance for the eastern city. This means the boozed-up arsonist could be jailed for up to four years.

The Christmas goat in Gävle has become such a fixture in Swedish life that it now has its own Twitter account to inform the world about its survival in the face of yuletide arsonists.

And in 2015 it was thrilled to made it past Christmas Day, but the fiery 26-year-old ensured it didn’t see the new year.

It was the 34th time the goat had burned since Gävle launched the tradition in 1966.

Over the years, the goat has been run over by a souped-up Volvo, attacked by a team of Santas and gingerbread men wielding bows and arrows, and burned down by a gullible American tourist who had been convinced by his Swedish hosts that doing so was perfectly legal. He served ten days in prison.