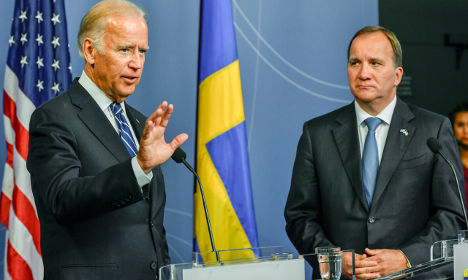 President Obama's right-hand man made the comments at a joint press conference with Prime Minister Stefan Löfven, the head of the Social Democrat-Green government, in Stockholm on Thursday.

Despite accidentally referring to Löfven as both 'President' and 'Vice President' during the press conference, Biden highlighted the good relations between Sweden and the US.

He went on to praise the Nordic country for taking in a record 163,000 asylum seekers during last year's refugee crisis, the highest number per capita in any European country.

“We know that it is not easy, but it is a reflection of the generosity and the commitment of your people. It is difficult but it is admired,” said Biden, urging other countries to also “step up”.

A temporary no-fly zone was in place in Stockholm on Thursday and a number of roads and bus routes closed for the duration of the US Vice President's visit.

He landed at Arlanda Airport in the early hours of Thursday, where he was met by Foreign Minister Margot Wallström, US Ambassador Azita Raji and Sweden's Ambassador to the United States Björn Lyrvall.

Biden was in Sweden to discuss bilateral and international issues, with a key point on the agenda being “global responsibility for migration and refugees”, ahead of a global migration summit in New York in September of which Sweden is one of the joint organizers.