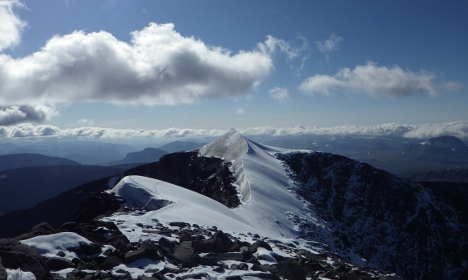 Measuring some 2,100 metres above sea level, Kebnekaise must seem like a molehill to the group of Sherpas normally based at the world's highest mountain, 8,848-metre Mount Everest.

But four Nepalese experts are currently at work building steps along the path to the southern peak of Sweden's most famous mountain to improve safety for tourists and other hillwalkers.

“We have done this work for generations, in our home town too, so we're used to the work,” said Ang Tempe, from Sherpa village Kunde in Nepal, who has guided climbers in the Himalayas for years.

“The work here is somewhat better paid, but above all it's safer than working as a guide or a porter,” he told Swedish radio, adding that many of his friends have died climbing Mount Everest.

The work is led by Norwegian company Stigbyggarna, run by entrepreneur Geir Vetti who has previously brought teams of Sherpa mountain path builders to the Norwegian mountains.

Kjell Sundsvall of the Norrbotten county administrative board explained that the steps project will make Kebnekaise safer and more accessible for the 10,000 people who climb it every year.

“A lot of accidents happen here. People break legs and arms and wrists too. Increased accessibility will probably lead to more visitors and will make it easier to reach the top,” he told Swedish radio on Thursday.

As The Local reported last summer, the Mountain Safety Council of Sweden has been working on introducing more signposting and guides in English as a result of an influx of foreign visitors.

“Visitors have to be able to choose suitable equipment, the right things to wear and not pack their bags too heavily,” coordinator Per-Olov Wikberg told The Local at the time. “They also need proper weather forecasts available in English and correct directions in order to follow the tracks…then they'll be perfectly fine.”