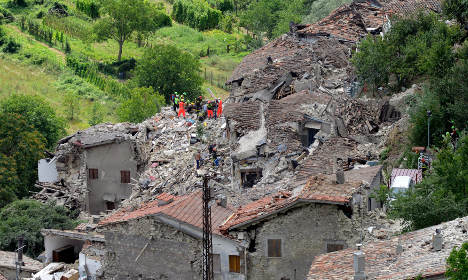 Follow our sister site The Local Italy for updates

Italian officials have said that they do not believe the country will need to invoke the EU's Civil Protection Mechanism to call on fellow member states for support and help after more than 240 people died when a powerful earthquake struck the area around Amatrice in central Italy.

But Sweden's Civil Contingencies Agency MSB said it has still made preparations to be able to urgently send help to Italy – as well as to earthquake-hit Myanmar, where at least four people died – if called upon.

“MSB has knowledge and previous experience from earthquake-hit areas and is always ready to assist in various way based on the needs of the country in question or of the UN,” said David Norlin of the agency's international operations team in a statement.

“We have a number of different resources on standby which could be useful after an earthquake, for example experts in assessment, coordination, logistics and information management. MSB also has material in housing, offices, logistics and IT which could quickly be sent to affected areas. We are in continuous dialogue with our EU and UN partners and are keeping an eye on developments so that we can hit the ground running if the question is asked,” said Norlin.

Sweden's prime minister Stefan Löfven was among those who expressed their sympathies for victims who died in the earthquake and their families and friends on Wednesday.

“It is a time of sorrow. We will of course work together with Italy – if they ask for help, the Swedish Civil Contingencies Agency will be ready,” said the Social Democrat leader.

The Swedish foreign ministry estimated that around 20,000 Swedish nationals are currently living or holidaying in Italy, but said there had been no reports of Swedish fatalities.

Meanwhile, in the remote area straddling Italian regions Umbria, Marche and Lazio, hundreds of people spent a chilly night in hastily assembled tents with the risk of aftershocks making it too risky for them to return home.

Scores of buildings were reduced to dusty piles of masonry in communities close to the epicentre of the quake, which had a magnitude of between 6.0 and 6.2.

Italian prime minister Matteo Renzi said it was too early to consider what might have been done to prevent the disaster.

“Today is the time for tears and emotion,” he said, vowing that his government would start reconstruction work first thing on Thursday.