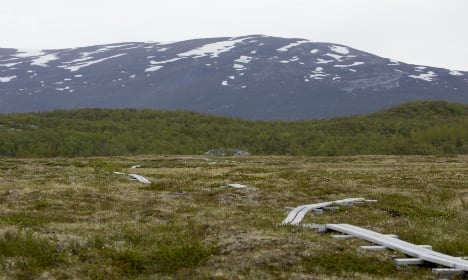 The only trace is currently a mobile phone found in the area and which is believed to belong to one of the men. Photo: Henrik Montgomery /TT

Police on Friday launched a massive search operation, including several helicopters, rescue workers and volunteers, combing the area to localise the two men who disappeared after setting off on a trek in northern Sweden on Tuesday.

The pair was scheduled to return to an Abisko mountain station at around noon on Friday, but never arrived, prompting staff to alert police.

Concern was further heightened after a tourist found a mobile phone in the area and believed to belong to one of the missing hikers.

Police spokeswoman Lisa Nyberg told Swedish news agency TT that the two men, both in their mid-70s, had been found trapped on a cliff  on Saturday evening and that they had been taken to hospital. It was not immediately clear whether any of them had sustained any injuries.