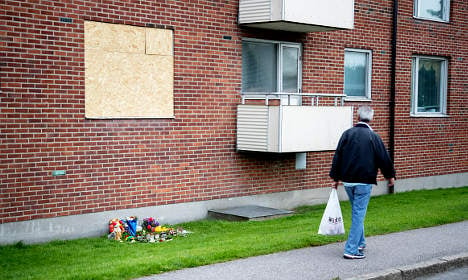 Yuusuf Warsame was killed when a hand grenade was flung through the window of an apartment in the Biskopsgården suburb of the city at around 3am last Monday morning. The boy, from Birmingham, was visiting the apartment with his family.

Police said surveillance footage taken in the area had not generated any new leads. Also, the attack took place at a time when most people were asleep, making it especially hard to find eyewitnesses in a district where police already have trouble getting people to testify in suspected gang-related cases.

He added that the police were continuing to work hard on the case and were urging anyone with information that might lead to an arrest to come forward.

The boy’s father Abdiwahid Warsame, said the eight-year-old had lain asleep when the grenade detonated, before dying in his mother’s arms.

“When I heard the news I had to sit, I could no longer stand up. My wife’s heart is broken,” he told the Birmingham Mail.

“She tried to help, she took him by his chest and held him, but he was dead.

Two of the boy’s siblings were asleep in the same room but were not seriously harmed in the attack, his father said.

A relative told local newspaper Göteborgs-Posten that the family had decided to have the burial in Sweden due to the emotional and financial costs of bringing the boy's body back to the UK.

Almost 200 people attended the funeral in Gothenburg on Monday to pay their respects to the boy.

Yuusuf Warsame had arrived in the city with his mother on August 13th, two days before his eighth birthday.

His parents are Dutch citizens of Somali origin and are resident in the UK’s second largest city, where Abdiwahid Warsame owns a shop.

There were at least five children and several adults in the apartment at the time of the blast, with several receiving minor injuries.

Police are working on the theory that the grenade attack could be linked to the shooting at a restaurant in another part of Biskopsgården in 2015, when two men were killed and eight injured in a gang-related shooting.

One of the men convicted over the fatal attack was registered at the same address as the grenade blast.

Organized crime expert Amir Rostami told The Local last week that the gang violence in Gothenburg had “escalated to the degree that the people involved in the conflict don’t even know what it’s about.”

Residents in area reacted with shock to the death.

“I’m afraid it’s getting worse and worse. I think the gang conflicts are escalating,” said Jörgen Fredriksson, who has lived in the area for more than 40 years.