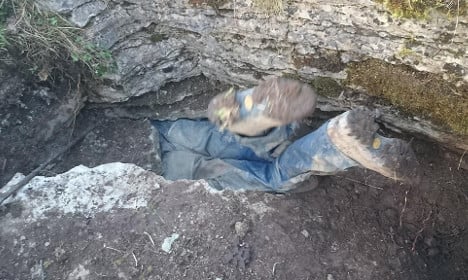 Per Bäckström on his way into the cave. Photo: Alexander Bennerstål/TT

It all started when five cave enthusiasts began exploring what looked like not much more than a hole in the ground. Around a year later they have managed to reach 150 metres into the previously unexplored cave.

“In some places in the roof there are several square metres of stalactites,” cave enthusiast Alexander Bennerstål told the TT news agency on Monday after Swedish radio first reported the discovery. “We have not measured all parts of the cave, so it is probably bigger than that. It's mostly a narrow passage where we are on our stomach or side, crawling, and sometimes you just about manage to push your chest through.” Lars Pettersson and Per Bäckström emerging from the cave. Photo: Alexander Bennerstål/TT

The hidden cave is located somewhere at the Martebo wetlands on north-eastern Gotland, but its exact location is being kept a secret so that curious explorers do not get injured or stuck in the winding tunnels below ground.

“It is unseen territory. It was really awesome when I came out into a cavern. Those behind me didn't believe me, they thought I had become loopy from being in a narrow space and digging for several hours,” said Bennerstål. The explorers are currently trying to make their way further into the tunnel, which could be even longer than 150 metres, to find out where it leads and if it is connected to the Lummelunda cave a few kilometres away, the second-largest cave system in Sweden.

But Bennerstål does not believe his discovery, while likely to garner huge interest in the field of speleology, will get the same attention as Lummelunda, which is visited by tens of thousands of tourists every year.

“We would direct anyone interested to the Lummelunda caves, because this one is extremely narrow. Someone just slightly bigger than us would have extreme difficulties getting in,” he said. 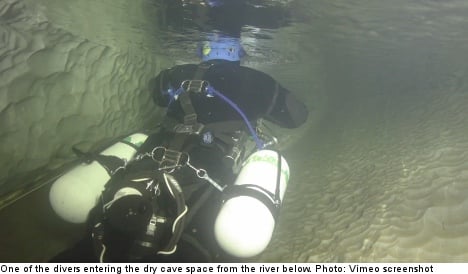