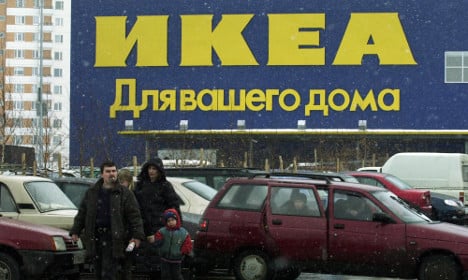 Ikea said it had plans to invest more than 100 bllion rubles ($1.54 billion) in Russia but “recent activities aimed at the Ikea Group related to old legal cases could slow down these investment plans.”

It issued the statement after a court in the western Russian city of Smolensk ordered Ikea to pay more than 507 million rubles to Russian businessman Konstantin Ponomaryov as part of a decade-long legal wrangle over supplying power to stores in the second city of Saint Petersburg.

The case is one of numerous legal cases launched in Russia against Ikea including over the ownership of the land where its national headquarters are based on the edge of Moscow.

The furniture chain which has 14 stores in Russia said it wants to work in a “fair and transparent business climate” and accused the authorities of attempting “to use illegal methods to extract further money from the company.”

Ikea, which has been working in Russia since 2000, has said it has paid more than 60 billion rubles in taxes in five years and has created more than 12,000 jobs.

The group is also mired in a dispute over the legality of its purchase of land that used to belong to a Soviet-era collective farm on the edge of Moscow where it built a shopping centre.

Its offices have been searched numerous times this year.

According to a recent investigation by Russia's Dengi magazine Ikea is involved in 500 legal cases —  more than any other company in the country.