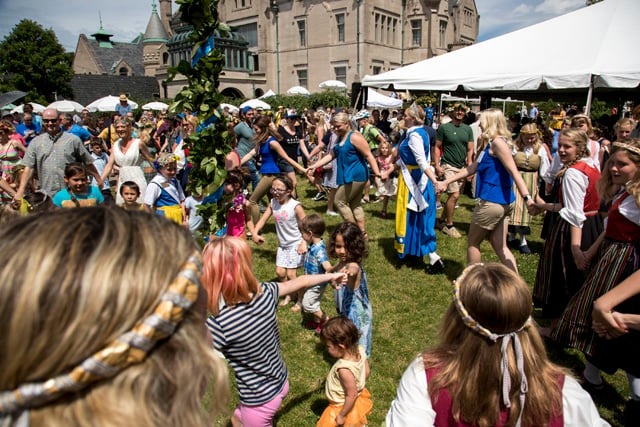 1. Focus on learning the words you use in your own language the most

The most effective way to learn a language is to learn it the way children first learn their native language, not how we learn in classrooms.

That means that the colours and days of the week don’t really need to be the first thing you learn. Start instead with everything you think you need for the most basic of conversations when you first meet someone. Beyond that find out how to talk about your main interests, as those are the things you are most likely to find yourself regularly talking about when you’re speaking your own language.

Go through daily life thinking about words and phrases which would be relevant to those recurring situations, such as mealtimes, because the very heartening fact of the matter is that we all know in our native language way more words than we regularly use.

So the good news is, it can be relatively easy, with dedication and persistence, to get to be highly conversational in Swedish, or reach functional fluency.

2. Join any Swedish or Scandinavian clubs or societies that you can

If you’re a university student, be sure to join its Swedish/Scandinavian/Nordic Society. From my own experience with my university’s Scandinavian Society, it’s a great way to meet Scandinavians and take part in and learn about the culture. The main purpose of suggesting joining a society like this is for the opportunities it gives you to practise your Swedish. You may not know many, or even any, Swedes at the moment, and they’re probably not going to magically find you. So do what you can to put yourself in situations where you’re more likely, or guaranteed, to meet Swedes.

From the Anglo-Swedish Society in London to Scandinavia House in New York and Swedish societies in places such as Oakland, California; Calgary, Alberta; Houston, Texas and more, the opportunities are there, so look into what’s near you, but most importantly, if you go to an event, try to speak Swedish, however much or little you know, from the very beginning.

Did you know that Scandinavians are crazy about crayfish? ? During this time of year, many Nordic families celebrate the end of summer by singing, drinking and eating delicious crayfish together. There's no party like a crayfish party! ??? .. #NordicCulture #Scandinavian #Crayfish

3. Put your money where your mouth is

You may find you've reached a wall of how far you can take yourself for a while, and need some things explained to you, or you may want the structure provided by some form of lessons to ensure you are actually working on the language. Definitely begin with free apps such as Duolingo, but if you really want to learn the language well and need help getting there, consider getting paid-for software or enrolling in a class. Many of the aforementioned societies around the world offer classes, for a fee, for example.

4. Immerse yourself in Swedish culture

Download for example SVT Play, the free app of Sweden's national broadcaster. Not all of the shows are available abroad, but a lot of them are. If you're miles off from being able to follow a programme in Swedish, pick ones which are in English and subtitled in Swedish (such as the period dramas, which are popular in Sweden) and read along and work out what the Swedish for some English words being used is.

There are also programmes you can watch and enjoy where you won't feel like you're missing out if you don't understand what they're saying, such as shows with a lot of singing. Whether it's outdoor sing-along Allsång på Skansen in the summer or studio-based show Så ska det låta during the year, the options are there.

Add Swedish songs to your playlist as well, and take a minute to look up what they mean. It's a great way to learn new vocabulary, but perhaps most importantly, immersing youself in Swedish culture, not only staying up to date with its popular culture but feeling like you're part of Swedish society yourself, makes you more invested in learning the language. You need a reason to do it, to keep going, and Swedish becoming the language that your life around you is in provides precisely that.


Watch Swedish entertainment as often as you can. Photo: Sofia Sabel/imagebank.sweden.se

5. Really put yourself out there

When trying to speak a new language, embarrassment isn't allowed to enter into the equation. Making mistakes is all part of the learning process, and anyone who's gone on to master a foreign language will have their stories of hilarious or embarrassing mistakes they've made. So whenever you go to a Swedish cultural event abroad, or visit Sweden as a tourist or business travellers, make the best use of that time.

This is one of my most important points, because if you don't put what you do know to use when the opportunity arises, you are giving yourself no chance of improving it. You're learning the language because you want to speak to people in it, so don't allow the Swedes to let you stick to English, show them that you're trying (that alone will impress them). 6. Dabble in some Norwegian and Danish

Trying out some Norwegian and/or Danish is a good way to make you consciously realize some systematic differences between the closely-related Scandinavian languages, and thereby shore up your knowledge of some Swedish spelling and grammar rules. Having some understanding of the rest of Scandinavia gives breadth to your cultural immersion in Sweden itself as well. Not to mention, one go at speaking Danish and you'll be thanking your lucky stars that you chose to learn Swedish instead. Just trust me on that one. From The Local's archive. Article first published in 2016.