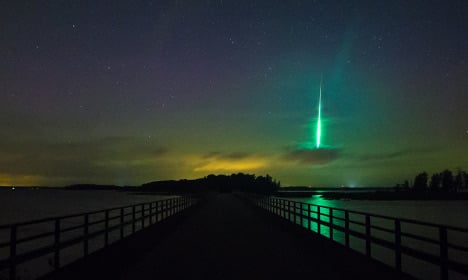 A Facebook group he follows informed the frequent aurora snapper of the slight possibility of a sighting on Tuesday evening.

He rigged up his camera on the shores of Lake Hjälmaren at 11.30pm and started to observe the lovely night sky. The majestic phenomenon was just about visible, so he stayed for a while.

Happy he had got what he wanted, he made up his mind to go back into Örebro, the central Swedish city where he lives.

“Just before I was going to pack up I saw a big green meteor,” Löfgren, 34, told The Local.

His camera was already facing north to capture the northern lights and he just happened to press the button at the ideal moment.

“I was overjoyed when I realized I had got the picture.”

He added that the shooting star had “flashed and sparkled in the sky” just after the photo was taken.

Earlier this month The Local spoke to Chad Blakley, an American photographer who specializes in the Northern Lights, about the transformational effect of the dazzling light show.