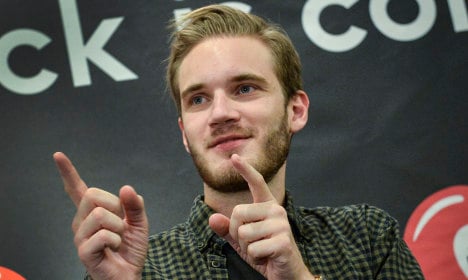 The affair started on Tuesday, when the Youtuber (whose real name is Felix Kjellberg) began complaining about the process Twitter uses to “verify” public profiles on the social media platform.

Twitter adds a blue badge with a white tick to profiles it considers to be of public interest in order to show that they are authentic. According to its website, these tend to be accounts representing people in media, politics and other interest areas.

Until earlier this week, PewDiePie was one of the verified accounts in question. That’s no surprise: with over 47,600,000 subscribers, he is the owner of the most subscribed-to Youtube channel in the world.

His verified badge on Twitter suddenly disappeared earlier this week however, leading to speculation over what may have happened. One far-fetched explanation came from a fake Twitter account masquerading as British news outlet Sky News, which claimed the Swede had joined extremist group Isis.

PewDiePie retweeted the fantastical claim in response, before joking that he and another Youtuber, JackSepticEye, had indeed joined the organisation, causing him to lose his verified status.

Me and @Jack_Septic_Eye have joined isis. Which is why we both got unverified.

Not everyone picked up on the joke, with Twitter users and even some media outlets taking the comments at face value. The Isis theory was only given further fuel when PewDiePie’s Twitter account was temporarily suspended on Wednesday morning.

But the Youtuber eventually put the speculators out of their misery later that day, when he posted a video on his channel explaining that the whole affair stemmed from an act of protest against Twitter’s verification process, and the temporary suspension of his account had nothing to do with Isis, but rather, a penis.

In the six-minute-long video the Swede ranted about the perceived social status attached to verified Twitter profiles, as well as how some users mass follow others in order to gain followers in turn.

“With the verification process being annoying… I decided to un-verify myself,” he revealed.

Kjellberg didn’t stop there: he described how his protest had also involved changing his Twitter profile picture to one which included an image of a penis. It was the explicit content that was the real cause of his account being suspended.

The suspension has since been lifted, and the picture of the penis removed, with PewDiePie last night tweeting that it was “heartwarming to see so many people care about me”.

The Local has also contacted PewDiePie for his take on the incident. His video explaining the event has already amassed over 2,700,000 views on Youtube since Wednesday.