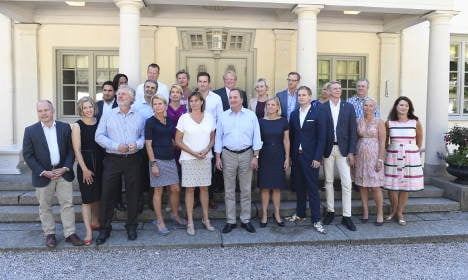 The Swedish government has gender parity and now the boards it appoints do too. Photo: Maja Suslin/TT

In the late 1980s Ingvar Carlsson’s Social Democrat government presented a gender equality bill with the goal of making half of the members of boardrooms in government bodies a woman. At the time the proportion was only 28 percent.

The original goal was to achieve the target within 10 years, and while that wasn’t possible, it has now been met after nearly three decades, the Swedish Government says.

Newly released figures show that by the end of last year the proportion of women on the boards of government bodies was 51 percent, while chair positions are also now distributed evenly among the sexes.

“It has certainly taken a number of years. And you often think that you need to work even faster with gender equality, but I think this shows that it is working,” she added.

As of December 31st the proportion of women on Sweden’s government appointed boards, advisory councils, committees and foundations stood at 51 percent, an increase from 49 percent the previous year.

The proportion of female chairpersons meanwhile is now 49 percent, up from 46 percent in 2014.

Last year Sweden came first in a YouGov ranking of attitudes towards gender equality among 24 nations, with 72 percent of Swedes surveyed responding positively to questions regarding gender balance.

Prime Minister Stefan Löfven meanwhile has previously boasted of having a ‘feminist’ cabinet, with the 24 positions shared evenly among the sexes.