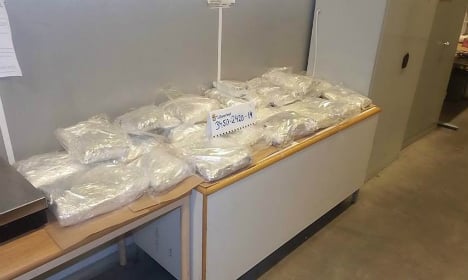 Police spokesman Lars Westermark says he has never heard of such a mistake having been made before. Photo: Swedish police /TT

The man was arrested in Skellefteå, in northern Sweden, earlier this summer after police found suspected drugs in his car. During questioning, the man initially confessed to having stored a small amount of amphetamine in his vehicle, but then changed the story to say it was dextrose. Quick tests carried out by police allegedly confirmed the powder was amphetamine, however.

According to Swedish news agency TT, a district court then ordered the man detained.

But subsequent, and more advanced, tests gave totally different results however: The white powder turned out to be nothing else but dextrose.

“I have never heard of anything like this happening before,” Skellefteå police spokesman Lars Westermark said. “But these quick tests have been approved, they’re used for screening. The instruments used are sensitive so one explanation to the result could be that there had been amphetamine in the proximity of which microscopic rests had been left behind.

It was not immediately clear how long the man was detained before the new test results came back and he was freed, or why he had spoken of amphetamine during his questioning.