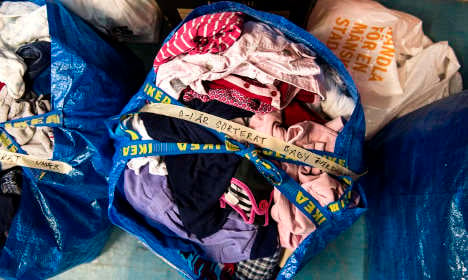 The study, carried out between August 31st and September 2nd by research company Inizio for Aftonbladet, asked 1261 people if they were willing to help asylum seekers.

Swedes reacted to the peak of the refugee crisis in 2015 by making charity donations to the sum of 19.4 billion kronor – a 1.5 billion kronor increase on 2014. But comparing this week’s Inizio poll to a similar one from a year ago suggests that willingness to help has reduced.

While the majority of respondents still said they want to contribute to some extent, their commitment has weakened: 30 percent said they “definitely” wanted to help, and 26 percent said “maybe”.

Last year, by comparison, 54 percent said they “definitely” wanted to help and 12 percent said “maybe”. The number of people answering that they did not want to help meanwhile is up to 21 percent from 11 percent in 2015.

A more dramatic shift has occurred in how many refugees Swedes think should be taken into the country going forward. In last year’s edition of the survey, 34 percent said that Sweden should take in fewer, but this year that had increased significantly to 60 percent.

Only 13 percent said that more refugees should be accepted meanwhile, down from 31 percent in 2015.

“We have taken in many refugees who have not yet been integrated, and the debate is ongoing. Many people in the survey wondered how taking even more in would work. Some also think that other countries should take more responsibility,” Inizio pollster Karin Nelsson explained to Aftonbladet.

As for how the Swedish population views the state’s response to the refugee crisis: 65 percent now say they have little confidence in how the Swedish government has approached the situation, compared to just under half (48 percent) at this time last year.

That decrease in confidence comes despite a toughened stance from Sweden, which has tightened residency laws and introduced border controls on the southern boundary with Denmark in the last 12 months.