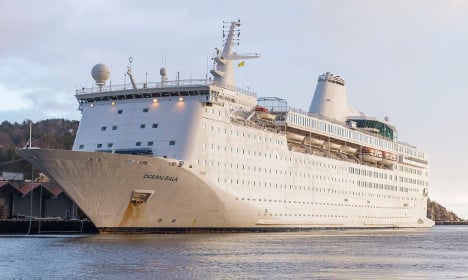 The owners of the Ocean Gala have been involved in drawn-out disputes with several Swedish authorities after the plug was pulled on an agreement to host 1,800 asylum seekers on the boat earlier this year.

Sweden’s migration agency (Migrationsverket) argued that the deal was void because necessary permits were not secured.

The ship was also banned from docking at Utansjö on the country’s east coast, but it anchored there anyway, something the local Härnösand municipality did not take kindly to.

Next, the vessel’s owners Floating Accomodations put it up for sale, complaining it could be necessary to cover losses they would incur if the migration board failed to cover 54 million kronor ($6.44 million) of operational costs.

But it seems the ship’s days in Sweden may not be numbered just yet. Local newspaper Örnsköldsviks Allehanda reports that the boat’s proprietor is now looking into the possibility of converting it into student accommodation, inspired by a suggestion to do so in an opinion piece in the same paper.

“We know the housing crisis among students in Sweden well and we see Ocean Gala as a creative solution to a big problem,” Floating Accomodations boss Kjell Tandberg told Örnsköldsviks Allehanda.

Tandberg said he has already initiated contact with the necessary government offices about offering them student apartments on board his ship.

“The migration board and the municipalities could help each other here to find good solutions for students. So far they have only worked together to sabotage us,” he said.

According to its owner, the boat has previously been used as temporary student housing in New Orleans during Hurricane Katrina in 2005.