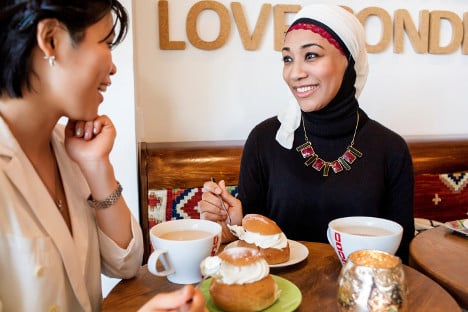 You'll have to learn more than just 'fika' to sound like a Swede. Photo: Emelie Asplund/Imagebank.sweden.se

The number seven. How could a thing as simple as a small number – and just three letters long at that – cause so much difficulty? And yet, it does.

It’s not possible to get very far in Swedish while avoiding the ‘sj’ sound. Anyone even half-trying to learn the Scandinavian language will have had to face up to it.

Forget about the letter S, because you’ll hear nothing of the sort in the number seven in Swedish. Think more along the lines of an H while imitating the sound wind makes when there’s a draft in your house instead, and you might be half-way there. Sort of.

My top tips for pronouncing it are to restrict the air in your throat and then, while holding that, breathe out through your mouth. Then round it off with an ‘oo’ to complete the word.

(If it’s really not for you, you could always say you’re learning the language with the accent that the Swedish-speaking population of Finland has, and just make an English ‘sh’ sound instead!)

My old friend, My. With 'My' being my first Swedish friend’s name, it has been pretty important to say it correctly. And yet despite only having two letters, that’s not always been the case. The ‘y’ sound in Swedish is deeper and quite drawn-out. Try saying ‘Mee’ but do the ‘ee’ further back in the throat than we’re used to in English.

The name, which is the Swedish version of Mary, can look quite strange when used in English sentences, but with the letter ‘y’ featured in ‘ny’ (new) ‘by’ (town/village) and many more, it’s a sound worth being able to do right. Once, at a table in the UK having dinner with my aforementioned friend My and my parents, I made an unfortunate but humorous mistake that I don’t plan on making again. Towards the end of the meal, once I was completely stuffed, I proclaimed ‘Jag är ful’ – which means ‘I am ugly’. Cue fits of laughter from My, and myself when I realized what I’d just said a moment after it slipped out.

So the lesson is to keep that ‘u’ sound short to say ‘full’ – though technically it still would have been wrong, as 'full' means ‘drunk’. The Swedish phrase used to say that you’re full is 'Jag är mätt'.

Raising more than a few eyebrows of English-speakers in Sweden over the years, ‘Slutstation’ a destination you’ll find on every train journey you go on up and down this beautiful Nordic nation, is in fact nothing more than the final stop on the route.

Another quirk of Swedish is that the letter K can be what I’ll call ‘hard’, like how it’s pronounced in English, but it can also be ‘soft’, where it’s actually a ‘sh’ sound.

And you see and hear this soft K all over the place, from köpa (to buy), to kämpa (to fight), and Köpenhamn (Copenhagen) to kärlek (love).

Kör, meaning ‘drive’, is pronounced with a soft K (sh-sound) while kör with a hard K means choir. Confused yet? I don’t blame you. What’s not to love about a language where you can walk into a room and say ‘Hej allihopa!’ and not sound like a buffoon?

Allihopa means ‘everyone’, and you can also use it as ‘Vi allihopa’ to mean ‘all of us’. Pretty simple really, and nothing difficult to pronounce. Remember to use it sometimes instead of the alternative ‘alla’ and you’ll sound much more like the native speakers.

Not just a letter, but actually a whole word of its own, ‘Ö’ means ‘island’. It's a pretty useful word in Sweden given the number of lakes in the country which may have small islands on them. The two largest cities meanwhile both have archipelagos on their doorsteps and Stockholm itself is made up of a number of öar (islands).

To say it, just make the ‘eurgh’ sound you make when something disgusts you and you’re more or less there. (To say ‘lake’ you have to combine over beloved ‘sj’ with ‘ö’ to get ‘sjö’.) Sweden’s second city, with pride of place on the west coast. It's Gothenburg to us English speakers, but Göteborg to the locals of the place.

The trick here is knowing how to do the G, both at the beginning and the end of the word. Swedish has hard Gs as in ‘glad’ and ‘gå’, with the G just as you would expect it to be, but also soft Gs, and you find two of the latter kind here. It’s actually said like a ‘y’, so say it as ‘Yertabory’ and you’re saying it like a true Swede already! Sweden’s weather can throw everything at you, from glorious sunshine, to grey clouds day after day. When it isn’t the season for snö, you might find regn instead, so whether you like it or not, it’s a word well worth knowing.

Be sure to roll your Rs in Swedish as you exclaim ‘Det regnar!’ (It’s raining!) while you look out your window. Some people can do it, some insist they just can’t, but R-rolling is the norm in Sweden so if you want to sound like a natural, you had better get practising.

Otherwise, just visit Skåne instead, the southernmost county next to Denmark, where they buck the national trend by making the R throaty.

Not a welcome mat outside your door, this one is for all us foodies out there, as ‘mat’ means food.

For speakers of American English, where A’s are usually shorter, take particular note. In Swedish, if there is only one consonant after it, that A is going to be long and drawn-out. Think along the lines of ‘mart’ to say this word, and you’ll never have to go hungry in Sweden as you search for the best things to eat.

Remember these ten Swedish sounds and words, and the Swedes will be head over heels at your knowledge of their language.

This article was written by The Local's British intern Jack Schofield, who taught himself Swedish from his home in the UK. Here's how he did it.