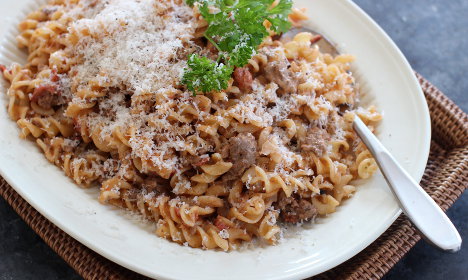 A man made his girlfriend dinner in a small southern town in Gislaved municipality in April. But instead of thanking him for the meal she attacked him with the plate of ragù after finding pancetta in the sauce.

She threw the plate, which hit him on the eyebrow, yelling “you can have your f***ing pancetta”.

The 47-year-old woman has now been convicted by Jönköping District Court for assault.

Both parties had been under the influence of alcohol at the time, according to court documents seen by The Local. The man later called the police from the garden and said the blow had left him dazed.

He told police that before the incident he had told the woman that there was going to be a birthday party for his son, but that his family had said that they did not want his new partner to come.

However, he said he did not know if it was that or the pancetta that had angered her.

The court found that the attack had been unprovoked and sentenced the woman to a month in jail.

Traditionally, the Italian recipe for ragù alla Bolognese does include pancetta (as well as carrot, onion, celery, ground beef, wine and tomatoes). But it is not the first time the beloved dish causes controversy.