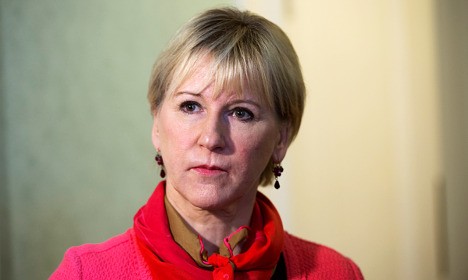 The Swedish minister named the repatriation of unaccompanied Moroccan minors in Sweden as one of the issues she would bring up. Around 800 North African youths are currently estimated to be living on the street in Sweden, and officials say it is difficult to send them home.

In #Morocco to meet FM Mezouar and conf on Women, Peace and Security . On agenda: regional challenges, human rights and bilateral coop.

Relations between Rabat and Stockholm have been strained since 2015, when Sweden was considering the possibility of recognizing the Sahrawi Arab Democratic Republic declared by the pro-independence Polisario Front.

Sweden's centre-left government, which came to power in 2014, abandoned the idea in January 2016. The Social Democrats, who voted to recognize Western Sahara as a “free and independent state” while in opposition in 2012, had held an internal consulation on the issue after taking office in 2014.

In September 2015, Morocco blocked a grand opening of the kingdom's first Ikea store, saying it lacked a “conformity permit”. Local media said the move was in retaliation for Stockholm's position on the disputed territory.

Wallström in January announced Sweden would not recognize the Western Sahara as an independent state, but would support UN mediation on the issue.

Morocco maintains that Western Sahara is an integral part of the kingdom despite UN resolutions that task a peacekeeping mission with organizing a referendum on self-determination.

The mission was established in 1991 when a ceasefire ended a war that broke out in 1975 when Morocco sent troops to the former Spanish territory and fought the Polisario Front.

Morocco controls all of the territory's main towns confining the Polisario Front to a narrow desert strip in the interior.