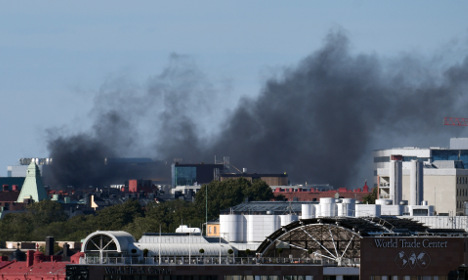 Sweden's most prestigious medical university has certainly had its share of troubles recently, hitting international headlines over the Paolo Macchiarini research scandal which caused two of its Nobel judges to be fired from the senior assembly that hands out the award in medicine or physiology.

And KI went from putting out figurative fires to a literal fire when thick billowing smoke coming from the construction site of its new Biomedicum research centre caused alarm on Wednesday afternoon.

Karolinska Institute having a bad time lately – all board sacked and now it's on fire.

“We have been alerted to a lot of styrofoam being on fire. There's a big risk it'll spread,” emergency control room officer Roger Werndal told the Aftonbladet tabloid shortly after 2pm.

It was not immediately clear how the styrofoam, which was piled up outside the building, had caught fire, but the blaze developed rapidly and the hot air caused several windows in the building to break.

Police briefly cordoned off Solnavägen, a busy road which runs past KI. However, after 45 minutes firefighters had managed to put out the flames.

Nobody was injured in the inferno, but one person had to be helped out by emergency services after they were accidentally locked into the building, unable to get out because of the smoke.

Police have launched a probe into the cause of the fire, currently investigating the incident as “carelessness endangering the public”. Nobody had been arrested or questioned by 5pm.

Around 6,000 students are enrolled in undergraduate or postgraduate courses at KI.