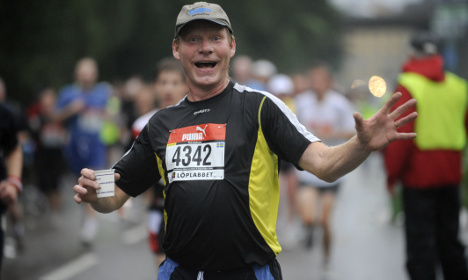 The Stockholm Half Marathon is one of the highlights this weekend. Photo: Leif R Jansson / TT

1. Take in some free theatre in Malmö

Malmö-based amateur theatre group On Stage Skåne have spent a lot of time and effort putting a new play together, and the final result, “The 9 Worst Breakups of All Time” will be unveiled for free on September 10th and 11th.

An English language comedy built around awkward reenactments of terrible breakups, the play is produced by a group of internationals in the south of Sweden. If you’re in the city, why not go along to the STPLN centre and take a look? It won’t cost a thing (although a donation of 60 kronor is recommended).

2. Get a guided tour of Stockholm, gratis

There is no better way to get to know a city than by spending time with someone who actually lives there, and in the Swedish capital that can be done at no cost. Free Tour Stockholm offers tours in both English and Spanish with the only recommended remuneration being a friendly drink for your guide once it’s all over.

The tours start at fixed times throughout the day and take place in three areas:  Södermalm, the Old Town and central Stockholm. Find out more here.

3. Dive in to Uppsala’s culture night

On the second Saturday of every September Uppsala celebrates everything cultural in the university city, and the 2016 edition is as exciting as ever, with many of the events free to attend.

Highlights include a night of music in Walmstedtska Gården park, a celebration of Bob Dylan’s 75th birthday, and a special tour of the Linnean botanical gardens. See the full programme here.

Posted by KulturNatten i Uppsala on Tuesday, 30 August 2016

Swedes love horse racing, and not only in the standard format. Combined driving or carriage driving – which is something like a modern version of Roman chariot racing – is also alive and well in the Scandinavian country. This weekend the sport will take over Gothenburg in a marathon race running through the centre of the city, all the way to the Slottsskogen park.

With no fee for spectators, the championship is a good chance to take a quick look at the high-octane action and see what you think. Details can be found here. 5. Wrestle with the Tug of War World Championship in Malmö

The only thing better than playing tug of war is watching people play tug of war – and inevitably, watching them getting covered in mud. On the 8th and 9th of September there will be plenty of opportunities to do that, when the world champions in the sport are named in Malmö.

Between 20 and 25 different nations will participate, and with Sweden one of the leading nations in the field according to the organizers, there’s a chance of a home win or two. Head over to Malmö FF’s old Malmö Stadion ground to see it all unfold for free. A programme of events can be found here. 6. Cheer on the Stockholm Half Marathon

Over 15,000 brave people have signed up to participate in this year’s Stockholm Half Marathon, where participants will run a 21 kilometre race all the way from the city’s Royal Opera House through the old town, Södermalm and Kungsholmen.

With plenty of beautiful scenery along the route, why not come along and cheer the plucky entrants on? At the moment the forecast is a warm and sunny one. Find out more about the route here. Hopefully the weather should be better this year. Photo: Lars Pehrson / SvD / TT

7. Enjoy the best of Baroque in Uppsala

The Baroque music ensemble Duo Tremendo love their art so much they’re showing it off for free at the city’s Kulturpunkten centre on Friday evening, with staples like Bach and Handel mixed with pieces from some of the era’s more obscure composers.

Along with the performance there will also be a talk about the period’s music as well as its instruments – not bad for a cost of absolutely nothing. The performance starts at 4pm, with more details available here. The violin is a staple of Baroque music. Photo: Ramon Espinosa/AP/TT

Northern Germany meets western Sweden this weekend when the Hamburg on Tour event takes over Gothenburg’s Gustaf Adolfs Torg. In practice that means food from the German city, products from some of its fashion and furniture designers, and even a reproduction of Hamburg’s Elbphilharmonie concert hall.

If you feel like finding out what all the fuss is about, the timetable can be found here. Check out our interactive calendar below for more things to do in Sweden: