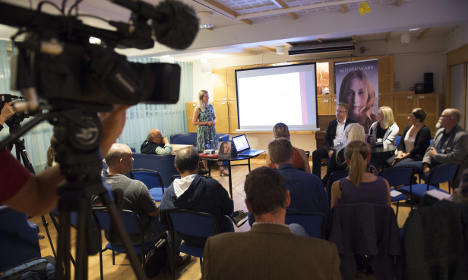 The launch of the new campaign against anti-Semitism in Malmö. Photo: Emil Langvad/TT

The project, a combined effort between the Jewish Community of Malmö and the City of Malmö, will focus on creating dialogue about anti-Semitism by exploring the shared experiences between the city’s Jews and many of its young people.

“We are actually quite similar in our experiences. Many Jews here are children or grandchildren of refugees who fled war and came to Sweden,” Jewish Community of Malmö chairman Fredrik Sieradzki told The Local.

“That’s the great thing about this new education programme, it uses that shared experience and it makes it easier to talk.”

The project will use movies, exercises and discussion materials on the topics of anti-Semitism, racism, and seeking refuge to help encourage discussions, with 288 teachers receiving special training.

When the materials were tested among different school groups, the result was that adolescents with similar experiences started to get more involved in discussions.

Malmö has struggled to combat anti-Semitism for a number of years. In 2010 the Simon Wiesenthal Centre, which represents Jewish interests abroad, issued a travel warning for the city urging “extreme caution”, before last year saying that “virtually nothing has changed” since.

Actor and former The Bridge star Kim Bodnia even said that anti-Semitism was part of the reason behind him leaving the crime drama, which is staged between Malmö and Copenhagen.

And while the number of reported anti-Semitic hate crimes has decreased recently, Sieradzki thinks that does not tell the whole story.

“If you look at the raw statistics it can look like things are improving, but it can also be just that registered crimes are down,” he said.

“If you don’t feel like something has happened, why would you report it? That’s a problem.”

In response to the new initiative, the chairman of Malmö Council's education committee, Social Democrat councillor Anders Rubin, argued that it could be useful in other parts of Sweden in the future, with immigration changing the make-up of many Swedish cities. And that is something that Sieradzki agrees with.

“Malmö has been at the forefront of a lot of things, it is very multicultural. This can be a bit of a litmus test for how the rest of Sweden can solve hate, with anti-Semitism being one of the oldest forms of hate,” he explained.

“We need to try and have a dialogue. Some exciting things are happening that way, and we hope it will lead to something more positive in Malmö.”

READ ALSO: My day as a kippah-wearing Jew in Malmö