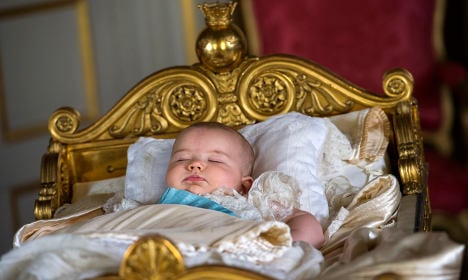 Five-month old Prince Alexander Erik Hubertus Bertil, son of Prince Carl Philip and Princess Sofia, was officially christened at lunchtime by archbishop Antje Jackelén, using water brought in from a special spring on the island of Öland as is traditional. Prince Alexander was at the centre of attention on Friday. Photo: Henrik Montgomery/TT

“Amen and high five for Alexander,” said the bishop and chief court chaplain Johan Dalman, who assisted Jackelén during the ceremony at the Drottningholm Royal Chapel, in the opening speech. The little prince stayed mostly quiet during the ceremony, unlike his older cousin Prince Oscar earlier this year. Thanks to a baby boom in the Royal Family, Alexander is far down the order of succession, number five. On the plus side, the further down the hierarchy, the fewer official duties children are expected to have, so Alexander will likely have fewer eyes watching him throughout his life than father Prince Carl Philip has. The white christening gown he wore is the same one worn by every royal at their baptism since Prince Gustaf Adolf in 1906. Finally, here's a picture of Alexander looking on while his grandfather King Carl XVI Gustaf presumably tells him a typical grandad pull-my-finger joke. Yes, Alexander, it's maybe funny the first time you hear it, but it soon wears off.