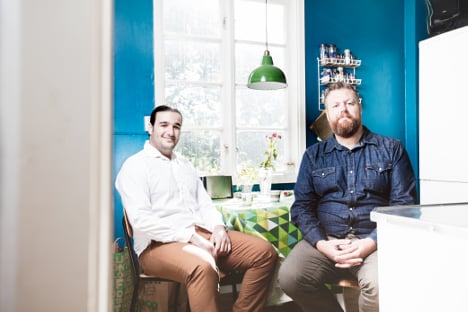 Learning Swedish is hard, especially when you’re trying to start a new life in a new country.

And even if you’re enroled in a Swedish language class, it’s hard to find time to practice speaking.

And then there’s the challenge of actually finding a Swedish-speaking partner to practice with.

Enter Let’s Talk – a new free app from Swedish candy brand Läkerol – that matches people who want to improve their Swedish with experienced Swedish speakers who have similar interests.

“The best way to learn a language is to speak it as often as possible in everyday life,” says Cecilia von Perglas, Marketing Director at Swedish candy company Cloetta, maker of Läkerol.

“Since we’ve been saying that Läkerol ‘Makes people talk’ for over twenty years, it made sense for us to develop an app that lets people do just that.”

Available in seven different languages, Let’s Talk works by first gathering information about users’ interests. The app then analyzes those interests to match people who are experienced Swedish speakers with people who want to practice the language.

From there, users can practice their Swedish via text, voice, or video conversations.

And Let’s Talk is a great both for people who are new to Sweden as well people who’ve lived in the country for a while but still want more opportunities to speak Swedish on a daily basis.

“Practicing Swedish every day has been really important for me,” says Mhd (pronounced Mohammed) Alfawakhiri, who arrived in Sweden 18 months ago from Damascus, Syria.

Alfawakhiri was lucky enough to meet Swedish comedian Kristoffer Appelquist, who last year gained notoriety in Sweden for a Facebook post about his efforts to get to know several newly arrived refugees in Sunne, a village of 5,000 inhabitants in western Sweden.

Appelquist offered Alfawakhiri a place in his home, and the two quickly became ‘language buddies’.

“I really wish more people who need to practice their Swedish had the same opportunity, because it can really change your life for the better,” says Alfawakhiri.

It didn’t take long for Alfawakhiri to learn Swedish, find a job, and have an active social life – proving that language is an important foundation for integration.

Thus it was an obvious choice for Appelquist and Alfawakhiri to serve as spokespersons for Läkerol’s Let’s Talk app.

“I was thrilled when I heard about Let’s Talk. Because, let’s face it, not everyone has the time or space to let someone move into their home,” Appelquist explains.

“The app is always in your pocket, which means that everyone who speaks Swedish can make a real difference.”

Learn more and download Let’s Talk for free at http://lakerol.se/letstalk/en/. The app is also available from the App Store and Google Play.

Cloetta has leading position in the Swedish confectionery market, offering a wide range of high-quality chocolate, candy, pastilles, and nuts. Our products include well-known brands such as Läkerol, Malaco, Ahlgrens bilar, Kexchoklad, Polly, Center, Juleskum, Plop, Sportlunch and Nutisal. In Sweden, Cloetta employs about 550 people working in Scandinavian headquarters in Malmö; in our sales organization; and in factories in Ljungsbro and Helsingborg. Red more on www.cloetta.se.

This article was produced by The Local and sponsored by Läkerol.