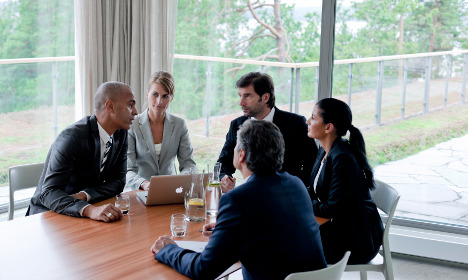 Should all boards be gender equal? Photo: Henrik Trygg/imagebank.sweden.se

If agreed to by parliament, the law will come into force next year. From 2019 firms will be fined between 250,000 kronor and five million kronor (29,400-$590,000) if fewer than 40 percent of their board directors are women. The rules will apply to 280 listed firms and around 50 state-owned companies.

“You can't keep talking about this year on year without actually delivering,” said Enterprise and Innovation Minister Mikael Damberg of the ruling Social Democrat-Green coalition on Friday.

Sweden has been accused in the past year of failing to live up to its reputation as one of the world's most gender equal countries, with a male majority of professors in higher education and members of parliament.

“There has been some improvement, around 32 percent [of board members] are now women. But things are moving very slowly,” Damberg told Swedish news agency TT.

He said that giving women more power at the corporate apex was also a sound business strategy.

“It's as much a question of competitiveness as of equality. Sweden has to be able to use all its skills,” he said.

It remains unclear if the centre-left will gather enough support to get the proposed new law approved by parliament. The Left Party is the only other party so far that has agreed to backing gender quotas.

Friday's announcement comes a week after Sweden achieved another long-term equality target dating back to 1988, with women now occupying every other position on the boards of government agencies.

Last year Sweden came first in a YouGov ranking of attitudes towards gender equality among 24 nations, with 72 percent of Swedes surveyed responding positively to questions regarding gender balance.

Prime Minister Stefan Löfven meanwhile has previously boasted of having a 'feminist' cabinet, with the 24 positions shared evenly among the sexes.

Sweden's ratio of women on boards is still far ahead of the EU average of 23.3 percent.

In 2012, the European Commission set a goal of 40 percent as applicable to 5,000 large corporations listed in the EU. The target should be met in 2020 in the private sector and in 2018 in public-owned companies, it hopes.

The objective does not apply to small and medium-sixed enterprises – companies with less than 250 employees and an annual worldwide turnover of less than 50 million euros – or to non-listed companies.