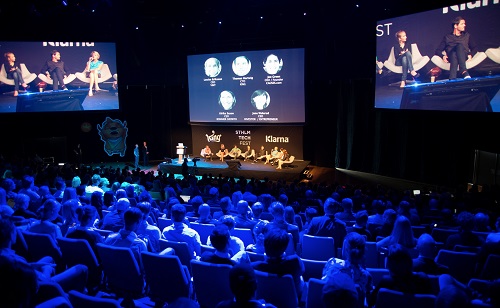 Sthlm Tech Fest returned this week with another year’s worth of tech innovation and start-ups for investors, other entrepreneurs, politicians and media to consider, but this year for the first time with the addition of a day called Solutions. Solutions towards meeting the UN Sustainable Development Goals (SDGs) that is, targets covering all areas and agreed in 2015.

From the ‘Solutions for Poverty’ presentations and panel discussion, one stand-out startup was that of Ari-Farm, which allows people to buy goats in Somalia at a small farm run by internally-displaced people.

It promises a good return on the investment, as users can sell the baby goats, while providing employment for locals. The founders stressed that it was not a charitable donation to use the platform and buy a goat, but rather an investment which provides a stable income for their farmers, allowing them to profit as well for milk sales, and earning the goat’s owner a sizeable while low-risk profit over time.

Demonstrating a good understanding of its consumer base, its charismatic Founder Mohamed Jimale, who presented his company, integrated an app allowing the owners to name and receive photos of their goats straight from the people looking after them.

Other attention-grabbing presentations at the event included creative, if eyebrow-raising, ideas involving the utilization of insects or algae to produce everything from biofuel, to feed for farm animals, even to food products for direct human consumption.

The logic behind it, and the reason why it has the potential to be so beneficial to the environment, is because algae and insects are at the start of the food chain. This means they retain the maximum amount of energy, and are much more efficient as such to produce, not least because it takes so much less water to create protein from insects than from anything else, particularly cows.

Only 10 percent of energy is passed on from animal to animal as they move up the food chain, so it’s clear that there is certainly something of value in this concept, and it’s been tapped into by companies from award-winning 2015 Polish start-up HiProMine, to the Swedish Algae Factory. The audience appeared sceptical as to the probability that we’ll be eating insect-based food any time soon, but the various companies do appear to have a range of avenues to offer them success, and help the environment in no small way.

The annual Gapminder presentation provided excellent context for the aims of the event, focusing on how people can make the best business decisions – and how to cast their votes to achieve the best outcome for their countries and the world as a whole, even with a collective worldview which is woefully inaccurate.

As presenter Ola Rosling stated, “The mission of Gapminder Foundation is to fight devastating ignorance with a fact-based worldview that everyone can understand. We started the Ignorance Project to investigate what the public know anddon’t know about basic global patterns and macro-trends.”

The presenters at Gapminder (do you have a name?) concluded that a majority of society has actively learned misconceptions, such as that things have been getting worse in the world over the past century (incomes and health have in fact risen enormously in every country on Earth, far beyond the best countries of hundred years ago).

These abysmal survey results are the work of misinformation and not simply lack of any notions on the issues: were respondents to have just guessed at random they would have performed much better than they did.

Developing a fact-based worldview seems crucial to finding the best solutions to the significant problems which do exist. The media can only be blamed so much, the presenters added, since surveys further show that journalists are no better informed of these macro-trends and global indicators than the public.

Nevertheless, from using urine to create electricity, to Refunite’s heart-warming family reunification programme, and from creative household energy-saving apps, to initiatives to get South African city-dwellers to cycle to work to ease traffic problems and reduce pollution, Sthlm Tech Fest’s Solutions event was buzzing with creativity and interest.

Whether they’re helping to reach the UN goals on a local, regional, potentially-global, or an immensely personal level, the entrepreneurs’ ideas are already being enacted and finding success.