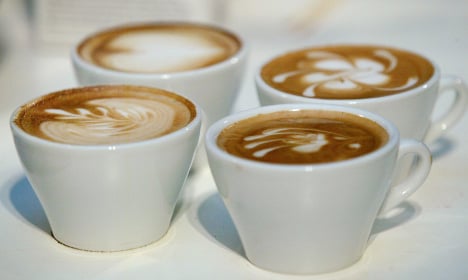 It’s impossible to talk about quality coffee in Stockholm without at least mentioning Johan & Nyström. Founded in 2004 by a group of diehard coffee-lovers, their vision is to sell sustainable coffee while ensuring farmers get their fair share of the money for their crop.

Whether that’s important to you or not, the standard and variety of coffee available at the concept store at Mariatorget is excellent. OK, so it comes at a premium: this is probably one of the more expensive cups available in town. With the staff exceptionally knowledgeable however, and the possibility to take part in spontaneous free tasting sessions in store, it’s worth swinging by and laying down a few extra kronor to see what you think at least once.

Located right across the road from Johan & Nyström, Drop Coffee’s brew is slightly cheaper but still high quality, though the trade-off comes in the form of a less interactive, more image-conscious hipster experience.

If you can get past the frosty exterior, then you’ll find a reasonably priced range of quality hand-brewed and machine-made coffee in a newly refurbished locale. Their beans can also be bought to take home.

A burst of activity is going on at the Hornstull end of Södermalm, with new restaurants and shops seemingly popping up by the day. Tro, Hopp & Kaffe, which opened at the start of the year, is one of the best new establishments, offering a friendly and welcoming vibe that makes it feel more like an old neighbourhood hangout than some of the hipster-oriented places elsewhere on the island.

A lack of snobbery doesn’t mean the coffee isn’t good however. The standard is excellent, and the value for money is good too. There’s a myth that Stockholmers don’t like to talk, but swing by this place for a great cup and the chatty staff will take care of the rest.

Tucked away at the dead end of a seemingly inconspicuous Östermalm street lies Snickarbacken 7, a combined café, exhibition space and store that offers one of the better cups in Stockholm’s snobbiest area.

Though not exactly cheap, it’s certainly not a bank-breaker for this part of town, and unlike many of the cafés nearby, you’ll get a tasty, high quality coffee for your cash.

With its hordes of tourists and frantic shoppers, Stockholm main drag Drottninggatan can be a pretty stressful place, but if you continue up the hill towards the Vasastan district you’ll find the perfect remedy in the form of chilled-out Kafé Esaias.

The beans here are provided by Gothenburg roasters Da Matteo (arguably Sweden’s best) while the preparation at the Stockholm end of the chain is great too. There’s a real neighbourhood vibe to Esaias, which along with its high-standard of drinks, make it a rare worthwhile coffee stop in the middle of town.

The SoFo end of Södermalm leaves a lot to be desired when it comes to good coffee, so recently opened Fikabaren just south of Folkungagatan is a welcome addition. Founder Lakis Psomas was one of the people running Tro, Hopp & Kaffe’s short-lived Arlanda airport branch, and the combination of a friendly, laid-back atmosphere with high quality coffee is definitely reminiscent of the owner’s previous employer.

Fikabaren’s beans are from multiple sources including aforementioned local roasters Johan & Nyström and Drop Coffee, as well as others from further abroad, so there’s a good mixture of flavours on offer. The drinks themselves are reasonably priced (try the hand brew), though buying beans to take home weighs in at the pricier end of the spectrum.

Posted by Fikabaren on Friday, 2 September 2016

Vasastan has no shortage of places to buy coffee but discreet, blink-and-you'll-miss-it Kafé Orion probably offers the best standard. Located around the corner from the newly expanded Odenplan metro station, this café is another one which uses Da Matteo’s beans. When prepared with a bit of expertise, as is the case here, that guarantees a tasty cup.

Though principally marketed as a place for lonely freelancers to work in a more collective environment, Coffice beside Medborgarplatsen is also worth seeking out for the coffee itself. Staff are knowledgeable, and there's a big variety of drinks available.

Cheaper cups of the same standard can be found in other parts of town, but around the immediate area Coffice is located in, there’s little competition on this level.

Posted by COFFICE on Saturday, 3 September 2016

Auel Handmade Coffee is unique in that it doesn’t serve machine coffee or even the increasingly popular standard hand-brews mentioned above. Instead, they do traditional Ethiopian coffee made according to methods that are purportedly centuries old.

Brewed in huge clay pots that make the serving process a fun experience in itself, the taste is, above all, different. The company doesn’t have a fixed location in central Stockholm, so keep an eye out for their food truck style wagons with the Auel logo. One currently parks up at Hornstull Marknad every weekend until the autumn. Located in the entry hall to one of Benny Andersson and Björn Ulvaeus’ old Polar studios, Kaffebar (formerly known as Mellqvist Kaffebar) has been around in various guises for years.

The current version is a no-frills but high quality cafe which serves a variety of machine-made coffee at a reasonable price. With independent record label Ingrid now occupying the studio space meanwhile, the music connection lives on, and you can even buy some of their records from behind the bar.