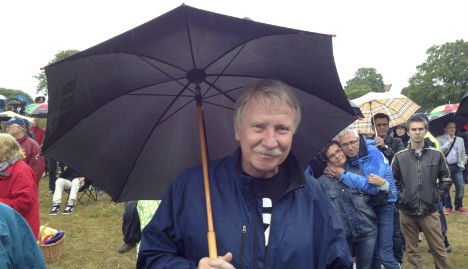 Ilmar Reepalu at the Almedalen festival in 2014. Photo: Lisa Abrahamsson/TT
The poll, conducted in 2015 by Gothenburg University’s SOM Institute and released this Autumn, will support efforts by the ruling Social Democratic party to limit the profits of companies providing welfare service.
According to SOM’s poll, 57 percent of those polled supported curbs on profits from providing welfare services.
A clear majority of voters for each of the centre-Right Moderate, Centre, and Christian Democrat parties, were in favour of curbs, with only supporters of the minority Liberal Party, which won just 5.4 percent in Sweden’s 2014 general election, wanting to keep the system unchanged.
The poll will be released in full shortly before the veteran Social Democrat politician Ilmar Reepalu releases the conclusion of his inquiry into the possibility of profit curbs in November.
Lennart Nilsson, Professor of Public Administration at Gothenburg University, told Sveriges Radio on Saturday that he believed that it would be difficult, if not impossible, for those who supported a strong role for the private sector in health, education and welfare provision to change public opinion.
“In the short term, the political leadership have to change opinions inside their own parties, and generally I think that [the possibility of doing this] is pretty limited, because the picture is so clear in its main points.”
However, he noted that while Swedish voters remained uncomfortable with the role the private sector has taken in the Swedish welfare system, when asked which political issues mattered to them, it ranked only in 11th place.
Reepalu last week indicated that his inquiry would suggest limits to “excess profits”, but would not say whether he planned to cap the returns of companies operating in taxpayer-funded health, welfare, and education sectors.
“We will try to close off the possibility of making large excess profits. It should be normal activities primarily delivers good quality. Private equity may be in other sectors.
Joachim Landström, the professor at Uppsala University who crunched the numbers for Reepalu, has suggested limiting the possible profit from delivering welfare services to eight percent of capital invested, plus inflation.
Url copied to clipboard!