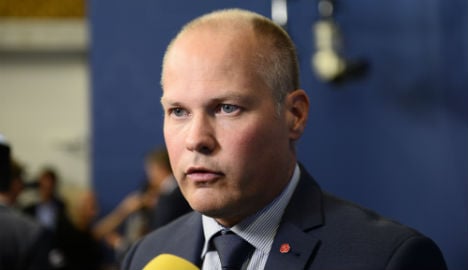 Justice and Migration Minister Morgan Johansson speaks in Stockholm in August. Photo: Izabelle Nordfjell/TT
At the peak of the refugee crisis last year, Sweden’s migration minister feared that the country would be so overwhelmed by the number of asylum seekers coming into the country that tens of thousands of them might end up sleeping rough in freezing temperatures.
“I was seriously worried that we would end up in a situation of having 15,000 to 20,000 homeless people sleeping on our streets in the middle of the Swedish winter,” Morgan Johansson, Minister of Justice and Immigration, told the country’s Expressen newspaper in an interview to mark the anniversary of the crisis.
“Every morning when I woke up, I would go in to the Migration Agency’s website and look at how many place we had [to fill]. Were we going to make it through that day?”
Despite heavy criticism of the Swedish government’s slow response to the crisis, Johansson said he believed both Sweden’s authorities and civil society deserved credit for what had been achieved.
“When we look back, I think that we should feel a very great pride over the large number of people to whom we gave a refuge from war. They could very well have not made it otherwise.”
Sweden provided housing and shelter to 114,000 people over the busiest four months of the crisis, and to more than 160,000 over the whole of 2015.
“That’s a burden Sweden as a country has never had to face before. But we did it. It was the municipalities, the Migration Agency, and tens of thousands of volunteers who ensured it got managed.”
He said that Sweden had been forced to introduce temporary border controls in November because it was reaching the limits of its capacity.
“In the end you come to a point where you have to say, ‘We in Sweden have done everything we can. More than anyone else. But not even we can manage to do everything.”
He said that Sweden was still carrying out an inquiry into how the influx could have been managed better.
“There were very few who could have predicted that it would develop as quickly as it did,” he said. “We have started an investigation as there will surely be lessons to be learned from this.”
Url copied to clipboard!