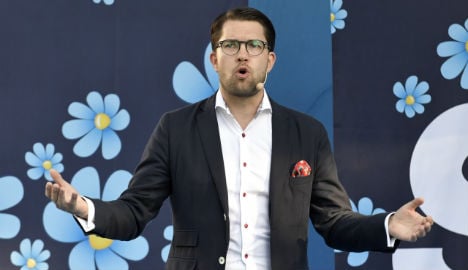 Jimmie Åkesson, leader of the Sweden Democrats, predicted in the summer that the Sweden Democrats would be a normal part of Swedish politics after the next election. Photo: Janerik Henriksson/TT
“This is a party with racist roots, which has come out of the white supremacist movement,” Stefan Löfven told Sveriges Radio. “I can never work together with that type of party. I will never do it.”
Löfven’s refusal came after the leaders of two of the smallest parties in the Swedish parliament called for an end the 'cordon sanitaire' around the Sweden Democrats, who are the third biggest party in the parliament with 49 seats.
“I think in principle that all the parliamentary parties should be invited in [to cross party talks],” Jan Björklund, leader of the Liberal Party, told the broadcaster.
“If they get a sort of martyr position, I think they actually gain from that. I think it is smart to treat them correctly, just like any other party in the parliament.”
Ebba Busch Thor, leader of the Christian Democrats, said that she believed it would have been better to invite the Sweden Democrat’s leader Jimmie Åkesson from last year’s cross-party talks on the refugee crisis.
“If you choose to exclude a party from the talks, then you also give the party more space to present their ideas. I think it would have been better to have them at the table,” she said.
Mattias Karlsson, who leads the Sweden Democrats in the parliament, said that now that almost all parties had toughened their stance on refugees and immigration, he did not see any reason to exclude his from talks.
“The reason for keeping us out and shutting off any influence for our voters has always previously been that we have had such a different view of migration policy,” he said. “Now the other parties have adopted our policies in important respects in that area, to still keep out constituents out, is, I think, pretty strange.”
Sweden’s minority coalition government, which consists of the  Social Democrats and the Green party, have had to rely on a succession of agreements with the centre-right Alliance bloc of parties to drive through new policies in areas such as defence, immigration policy, and anti-terrorism measures.
But it has steadfastly refused to cooperate with the Sweden Democrats.