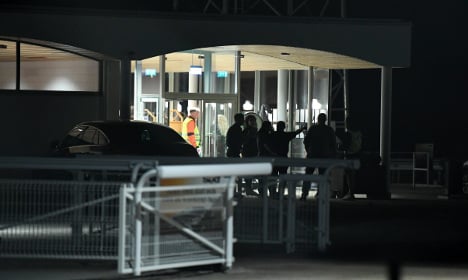 The trio hit the betting office at Bro Park racecourse in Upplands-Bro at around 7pm just 20 minutes after the last horse passed the finish line on the final day of a weekend of races.

“The men ran into the building and threatened a lot of people, among others the staff at Bro Park. One person had an assault rifle pointed to their head,” a witness told racing newssite Travronden.

After seizing what tabloid Aftonbladet reported as a seven-sum figure – although neither police nor organizers were able to immediately confirm this – they fled the scene by car.

Police said caltrops were used to hinder their pursuit of the robbers. A burned-out vehicle was later found north of the crime scene and according to Aftonbladet the group then continued by boat on Lake Mälaren.

“We found a burning car, which is not to say that it is the getaway car, but we cordoned it off. There's nothing concrete after that. We are not ruling anything out, we'll see what we find,” police spokesperson Lars Byström told the newspaper.

The competition Festival of Swedish Racing was held at the racetracks from Friday to Sunday, with cash prizes of around eight million kronor and a total of 1.4 million kronor handed out in the main race Stockholm Cup International on Sunday.

“There is cash in circulation, but no specific amount. The nasty thing is that people were threatened at gunpoint and how hard that can be,” racecourse boss Ulf Hörnberg told the TT newswire, but added to Aftonbladet that the robbers could have got away with at least “hundreds of thousands” of kronor.