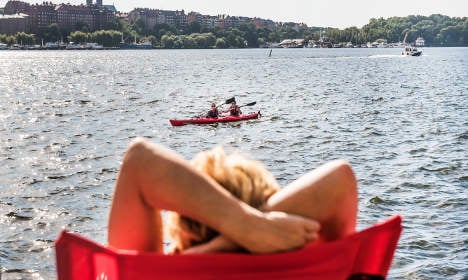 After a chilly August which forced many based in Sweden to sadly pat the barbecue goodbye and bemoan the end of summer, warmer temperatures are back for a week-long heatwave.

“It has been a very nice month of September so far in large parts of Sweden. And we've got lovely weather on the way again,” meteorologist Marianne Aabrekk of weather agency Storm told Expressen.

“There's a solid high-pressure front moving in from Spain and France,” she added.

Sweden's national weather institute SMHI on Monday morning had a warning in place for forest fires in south-eastern Sweden, but also harsh winds in the mountain regions in the far north-west.

The sunny weather is expected to stick around for most of the week.

In Stockholm, temperatures are set to climb to around 25C on Thursday. If you are in southern Sweden, tomorrow may be a good time to enjoy a lunch break with colleagues out on the town.

“On Tuesday the weather will peak,” said Aabrekk about the southern regions.

Northern Sweden, even parts where autumn has officially arrived, is also expected to get another taste of the late summer sunshine, but may also experience some fog and rain.

READ ALSO: The six most beautiful autumn walks in Värmland