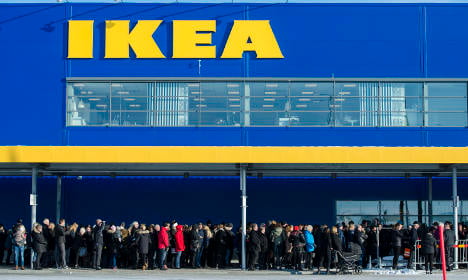 “Our focus on kitchens, kitchen equipment and dining rooms has proven very popular with customers and contributed to the strong result in the past year,” IKEA Group chief executive Peter Agnefjäll said in a statement.

Ikea's fiscal year runs from September to August. In the previous year, sales rose by 11.2 percent.

Ikea Group, which is not listed and which manages most of the company's stores, is expected to release its full earnings report before the end of the year.

Ikea's 340 stores, including 12 which opened this year, registered more than 780 million visitors between September 2015 and August 2016.

Germany remains the group's biggest market, just ahead of the United States. China, Australia, Canada and Poland are its fastest growing markets, the group said.

Ikea Group plans to open its first stores in India and Serbia in the coming years, it said.

READ ALSO: What happens if you spend the night at Ikea?