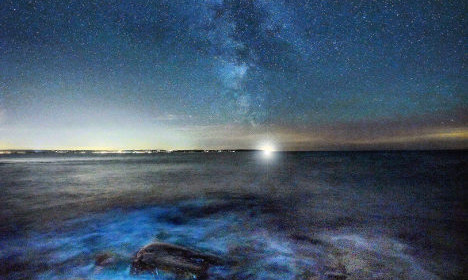 Joakimson lives in Kaxholmen, Jönköping, and works as a festival director at the Gullbranna festival near Halmstad, but it's his photography that has been attracting attention on social media recently.

“I began photographing when I was a teenager. Then I went to an arts and photo school. I have been doing photography professionally since 2000,” he told The Local.

Some of Joakimson's most striking pictures are those of Sweden at night. Asked what he finds particularly appealing about nighttime photography, he replied: “In the north, we have a fantastic light in the evenings and nights, especially during the summer. The blue light creates a special atmosphere in the pictures.”

Joakimson said his favourite places to photograph are where he lives, near Lake Vättern, as well as Gotland, Öland, the west coast (Halland and Bohuslän) and the mountains of the Swedish north.

His tips for taking the best photos? “You need time and you need to take many pictures and get to know your camera. Work on composing images that you want, use different lenses and shoot from different perspectives.”


The Northern Lights, captured a week ago near Jönköping. Joakimson told The Local this is one of his favourite photos. Photo: Andreas Joakimson