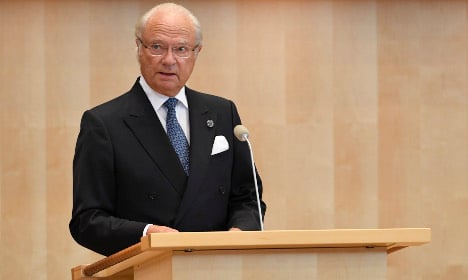 King Carl XVI Gustaf at the opening of the Riksdag. Photo: Jonas Ekströmer/TT

The Riksdag’s members of parliament (MPs) watched on as the king addressed them, with the EU, Swedish values, and the refugee crisis prominent topics in his speech.

“The European Union has come under strain, but we must maintain our belief in cooperation between countries and a union that guarantees peaceful collaboration,” he said.

“I hope that all Swedes, both here in Sweden and abroad, stand up for our values. Those are values like a belief in equal worth, equality between the sexes, faith in democratic governance, freedom of religion and freedom of expression,” he added.

“In just a week’s time there will be a summit in New York on the global refugee situation. This is an important meeting, and Sweden is one of the co-organizers.”

“Our cultural heritage is the glue that binds us together. It is rich and multifaceted – created through influences from different countries over centuries,” the king noted before declaring the 2016-17 parliamentary session open. The day started at 11am with a roll-call of MPs, who had a choice between attending a religious service at Stockholm’s Storkyrkan church or, for the first time, an officially sanctioned secular ceremony.

The religious ceremony was attended by Prime Minister Stefan Löfven, the leaders of the Moderates, Centre Party, Christian Democrats, Sweden Democrats, and the Royal Family.

Ministers then made their way to the parliament building for the opening ceremony, with the Royal Family arriving via horse and carriage just before 2pm. Fanfare was provided by the Royal Swedish Army Band, while more modern musical interludes were performed by guitarist Janne Schaffer, who has played with the likes of Abba and Bob Marley.

PM Löfven took to the podium after the king. His speech touched on topics like the growing gap between the rich and the poor, violence against women, and the prospect of Sweden joining Nato.

“Our security policy remains unchanged. Freedom from military alliances has served us well and contributes to stability and security in northern Europe,” Löfven declared.

A new strategy on violence against women will soon be presented, he announced, adding that it should “not be up to men to decide where women are allowed to go, or how they should dress”.

Löfven also announced that Anna Ekström will be the new minister for secondary and adult education, replacing Aida Hadzialic, who resigned in August after being caught driving under the influence of alcohol.