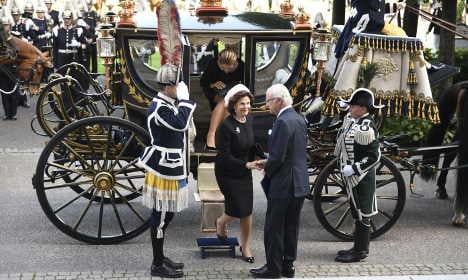 On Tuesday afternoon several horse-drawn carriages were driven through Stockholm, and the elegantly-dressed footmen rolled out the steps and let the king and queen of Sweden disembark outside the Riksdag parliament building.

King Carl XVI Gustav and Speaker of the Riksdag Urban Ahlin led the procession into the building, followed by Queen Silvia and Prime Minister Stefan Löfven. A choir sang on the marble steps as flag-bearers dressed in Swedish folk costumes lined the deep green carpet. But what’s all the pomp and circumstance about? It was the opening ceremony for a new session of the Swedish parliament. We spoke with political scientist and Stockholm University lecturer Marja Lemne to find out more.

What does it mean exactly that the Riksdagen is opening?

The opening is a big ceremony. It doesn’t actually mean very much; it means the term has started for members of parliament.

This is one of the few functions that the king of Sweden has: he opens parliament. So it’s a great ceremonial value for lots of people, that’s the main thing. But wait, doesn’t the government work year round? Why does parliament open in September?

Yes, the government does work all year – although in the so-called “summer government” the weekly meetings can be attended by as few as five ministers.

But this isn’t government, this is the parliament. Parliament members have long holidays. The reason for this is that they are supposed to spend time back home, keeping contact with their voters, the citizens who have elected them in the places where they live.

That’s fascinating. Has it always been that way?

No, until the 1970s parliament opened in January. But after Sweden rewrote its constitution we had it changed, so now it’s like a school year, with two terms: autumn term and spring term. So this is the beginning of the 2016-2017 parliamentary year.

Ok, so what actually happens when Swedish parliament opens? Before 1970, the king gave a longer speech. He was the one who spoke about Swedish values and politics. But that was many years ago.

Why did it change? What is the king’s role exactly?

Sweden is a constitutional monarchy. This is a very particular kind of system.

Back in the 1960s we reviewed our constitution and rewrote it. Some political parties wanted a republic, and some wanted to retain the monarchy.  So this was our compromise, a constitutional monarchy. We have a monarchy, but the king is not the chairman of meetings with government or anything. And after elections it’s the speaker of parliament who summons the party leaders and proposes what government should be chosen.

With few exceptions, the king in Sweden has no real power, he just does ceremonial tasks. That’s very different from the monarchies of Denmark and Great Britain. So what should we expect from the Prime Minister’s speech? Anything interesting?

Well, this speech is not as interesting as the first speech after they took office after elections last year. When there’s a new government it’s always very exciting for us political scientists to read it – it’s like Christmas Eve for us!

But it’s still interesting. It’s interesting to see what issues they will take up. Where do the Social Democrats and the Green Party stand now in regards to the migration crisis? Or what about the police crisis, the lack of resources and the police reorganization which has not functioned? Will he mainly focus on international problems?

What do you think, what issues will be in focus this year?

Well, based on my background working in the Ministry of Finance many years ago, I have some guesses. I think they have to focus on the international crisis and what is going on in Europe.

Maybe Prime Minister Löfven will mention the consequences of the Brexit and when Britain is leaving, and of course the international migration crisis. But I don’t expect a lot of upcoming policy changes there. During the last year the policy has already changed rather radically, from open arms to a sterner regulated migration, so it probably won’t change too much more right away. To summarize, what is so special or unique about the way Sweden opens parliament?

It’s quite informal. I think the British queen has her crown on still when she opens parliament. In Sweden it is very informal. They don’t dress up in tuxedos and fancy ball dresses or anything, you’re not that dressed up – not even the royal family. There’s no fancy dress like there was back in the 1950s and 1960s.

Who can watch the opening ceremony of parliament?

There are a few people from the general public who get invited to watch, but it’s mainly for all members of parliament and government. There is a reception afterwards that public authority heads and important people in society attend. It’s more of a forum where they can meet informally.

But the whole thing is also broadcast on TV and radio so anyone can watch.