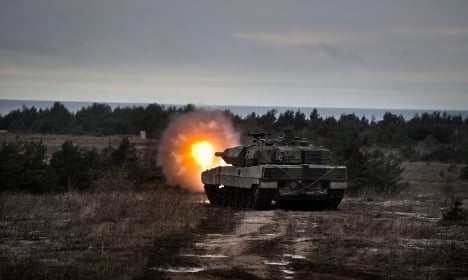 Swedish leaders have previously agreed to station soldiers on the strategically located island in the Baltic Sea from late 2017, but early on Wednesday morning some 150 mechanized infantry troops currently taking part in a military exercise on the island received an order not to leave.

“External factors in the world have deteriorated over time and it means I have made a decision about a permanent presence and that we put the battle group here earlier,” the Supreme Commander of the Armed Forces, Micael Bydén, told broadcaster SVT, which first broke the news.

He stressed that Sweden is not believed to be under immediate threat, but that security and the political situation in its surrounding area have changed in the past few years.

“We have to look realistically at the situation in the world. The Armed Forces are now taking their responsibility and demonstrating that with increased military capability we are taking responsibility for the country's sovereignty,” said Bydén.

The troops will stay on Gotland for now and will later be replaced by other soldiers until a fixed unit has been established by mid-2017. “Until the battle group is in place, units from different parts of Sweden will be stationed and operate on and around the island,” wrote the Armed Forces in a statement.

READ ALSO: 'Sweden would not be able to defend Gotland'

The island's last permanent military personnel left in 2005, but Sweden's political parties agreed last year to bring back its soldiers and boost Sweden's defence budget by 10.2 billion kronor ($1.2 billion) from 2016-2020.

“According to an agreement in 2015 the Armed Forces should establish a battle group on Gotland by 2018 at the latest, so this is completely in line with what a majority of parliament has decided,” defence ministry press spokesperson Marinette Nyh Radebo commented to the TT news agency.

Gotland is at the centre of the military defence debate in Sweden, where fear of what is perceived as an increasingly assertive Russia has grown in recent years. Bydén and Defence Minister Peter Hultqvist have both spoken of concerns over a series of near-misses between Russian jets and Swedish aircraft.

Sweden's security police Säpo has described its eastern neighbour as the biggest threat to security and has raised alarm over “pro-Russian messages” spread to “exacerbate worries and create splits in society”. Russia, meanwhile, has in turn accused Sweden of pushing anti-Russian propaganda.

READ ALSO: What's life like in the bullseye of Sweden?