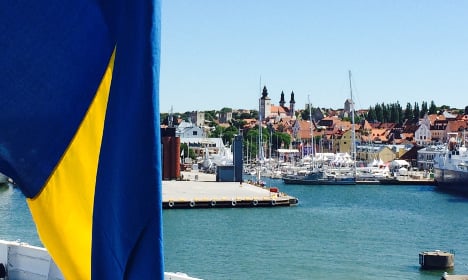 Say 'Gotland' and most Swedes will think of sandy beaches, intriguing limestone formations and its annual politics meeting. It may be hard to reconcile that image as a tourism hotspot with the idea of armed troops now being permanently stationed on the island in response to changing Baltic Sea security.

In an effort to understand why, we spoke to defence expert Stefan Ring about what the decision means for the island.

Why is the stationing of permanent troops on Gotland significant?

Because of the changes in the security environment in the Baltic region. Since the annexation of Crimea we have seen a worsening situation and many observe that Russia in many ways is acting with a lot of aggressiveness. We can also see that in international analysis and also now in Swedish analysis, Gotland is given a very strong role in a situation where Nato has to support the Baltic countries.

Sure, but is there any realistic threat from Russia to Gotland?

I would say I have no fear for an armed aggression directly against Sweden from Russia, but there is a risk, if we have a conflict concerning the Baltic countries, that there would be a need for Russia to occupy Gotland and use it as a base for preventing support from Nato.

Why has this decision been made right now? Has the defensive situation deteriorated?

I wouldn’t say it has deteriorated so much, but we are on a slippery slope, so to speak. There was a decision which had already been taken that we should put troops on Gotland next year, but now the Supreme Commander Micael Bydén has decided to make it earlier and I think it shows the rest of the world that the Swedish Armed Forces are prepared to act swiftly and that they are not bound by the plans, they can act outside of them, and in that aspect, they show a readiness to be able to handle even situations where they are taken by surprise.

Is 150 troops enough in case of any instance of genuine need?

No, I would say it’s not enough to stop an armed aggression towards Gotland, but we must remember that the Armed Forces right now have few units. I think the most important thing these troops can achieve is that they can support other units if the Armed Forces want to strengthen the defence of Gotland. We will then have troops on Gotland and it will be easier. One thing we lack though is anti-aircraft units. That’s a most central thing to have if you want to defend Gotland.

How would you describe Swedish-Russian relations today?

I would say that they are quite frosty. There are no talks between the Swedish and Russians generals. They have cancelled all of the dialogue between the Armed Forces. One can also see that the political relations are not very good. Soldiers during an exercise on Gotland in 2015. Photo: Mattias Nurmela/Försvarsmakten

Will the military presence change the character of the tourist hotspot?

No it won’t. It’s only 150 soldiers, it won’t really change anything on the island as such. The main reason I believe is to be able to support further enlargement of military troops on Gotland.

Are there any threats to Swedish territorial sovereignty and security?

I would say today there is no threat against Swedish territory or against Sweden as a nation, but things can change. And there could be a situation where an escalation could occur without anyone wanting it to happen. The situation can get out of hand for the political leaders, and that could happen very fast, and therefore it’s vital to be prepared and right now I consider also Gotland as important for both Nato and Russia. If it’s left there without any defence at all it will be tempting. It’s tempting for Russia to get there first.

Since Russia has Kaliningrad (a Russian exclave between Poland and Lithuania post-WWII), if they also controlled Gotland they would control the whole Baltic Sea, both by sea and in the air. A combination of those two territories could be very important for Russia, in a situation where you have a conflict. If Sweden just let Gotland be, then we could allow Russia to start to get ideas, giving them the impression that Gotland isn’t all that important to Sweden.

There's a lot of debate about Nato. Do you think Sweden will join?

That’s a question of domestic politics I would say. From my own perspective I think it would be much easier in many ways to cooperate within the Nordic countries – much easier to have cooperation with Denmark and Norway for example – and have common operational planning and so on and so forth. So I agree with the analysis of Krister Bringéus (Sweden’s Ambassador to Nato) in his report last week. I would argue that the advantages made in that report are of a more substantial nature than the disadvantages.

Stefan Ring, former Secretary General of the Swedish General Defence Association, Lt Col in the Swedish Armed Forces for 42 years and former Head of the Military Strategy department at  the Swedish National Defence College, spoke to The Local in conversation with our intern Jack Schofield.