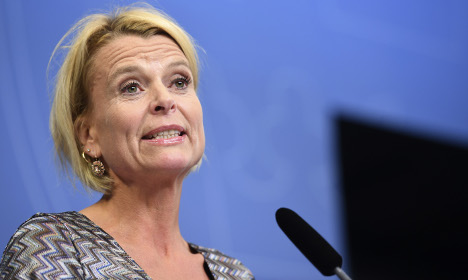 Information about the agency will be released before the government’s budget proposal next week. The need to create a central gender equality authority was a key conclusion made by a study set up by the previous centre-right Alliance government, which was delivered last autumn.

Unequal pay, sexual harassment and violence against women were all cited as signs that the country is still a long way from being gender equal.

“We are still in the midst of inequality because we don’t have a national grip of and control over gender equality policy,” Social Democrat equality minister Åsa Regnér said at a media conference on Thursday.

“There is a lack of knowledge on which kind of action has been implemented and what kind is meaningful. A lot of good work still exists in isolation,” she added.

A number of Swedish entities are already actively working on the issue today, including Gothenburg University, the National Centre for Knowledge on Men’s Violence Against Women, and the county administrative board in Östergötland.

The Swedish government wants to make better use of their knowledge, and believes that with an agency it will also be easier to facilitate accountability for shortcomings in gender equality work.

“Today the picture is so fragmented that it’s really difficult to know for example who is responsible for violence against women not decreasing,” Regnér noted.

Where the new agency will be based, how it will work and what powers it will have will be decided by an organizing committee.

Along with the new agency, the Swedish Government is also due to present a new national strategy on violence against women, with a 900 million kronor ($106 million) budget allocated to it for the next four years.

“We’ve done far too little preventive work. The collective focus will be to prevent beatings or rapes from occurring,” the equality minister said.

Other measures will also be designed to tackle honour-related violence as well as buying sex and human trafficking.

Earlier in September, Sweden achieved a long-term gender equality target dating back to the 1980s, with a woman now making up half of the members of boardrooms at government bodies.

READ ALSO: Åsa Regnér on why the Swedish government is introducing a new strategy on male violence against women